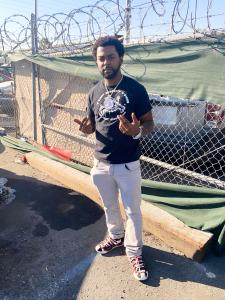 LAS VEGAS, NEVADA, UNITED STATES, July 8, 2021 /EINPresswire.com/ — Blending together Southern trap with a West Los Angeles vibe creates a whole new world for hip hop entrepreneur Justen Kilgore. With over 12,000 followers on Spotify alone, Kilgore’s music has reached listeners all across the globe. His music stems from life experiences and the varied locations that he has traveled between while growing up. His past has influenced his present, and in doing so, Justen Kilgore has built his own empire.

With an accomplished background in music, Justen Kilgore decided to head one step further and invest his time in co-founding record label Top Shottas Music Group LLC. Brought to life at the beginning of 2019, Kilgore and fellow co-founder Shabaka Khonsai launched the label with all aspects of the music industry in mind. Top Shottas Music Group LLC specializes in recordings, mixing and mastering, promotion and marketing, along with distribution and publishing. As artists themselves, Kilgore and Khonsai began releasing their own music through the label, before opening doors to other artists like XCraveLabz, 8ankz, Jay Rivas and 2 Shitty. Working with Micheal Craven, an engineer and executive producer for Top Shottas Music Group, they produce a diverse array of music, ranging from hip hop and rap to reggaeton and rock. With diversity in mind, they work hard to produce hit after hit for fans everywhere.

Justen Kilgore’s own music has seen some impressive achievements. With 56,000 followers on Instagram, he has created a connection with his fans through singles like ‘Dangerous Games,’ ‘Passion,’ ‘Throwing Smoke’ and ‘Hit The Road.’ Kilgore’s latest single ‘My Strikers’ followers the same success accompanied by an engaging music video that has already reached over 60,000 views in less than a week. His musical influences are those of like-minded creators such as Jay-Z, James Prince, Ice Cub, 50 Cent and Lil Wayne. What makes Justen Kilgore’s sound individual and personal, is the inspiration behind the tracks; storytelling based on his own life. Born in Houston, Texas, Kilgore grew up moving through different states before settling in Los Angeles, California. His unique experiences mean his music fuses together styles from different coasts, creating something rare and distinctive.

The future is bright for Justen Kilgore, who is set to release his next music video and single ‘Honest,’ on July 31st 2021, available on all platforms. Fans can expect to see the release of more music, ‘Streets Out’ and ‘Please Don’t Lose Ya Life’ in August.