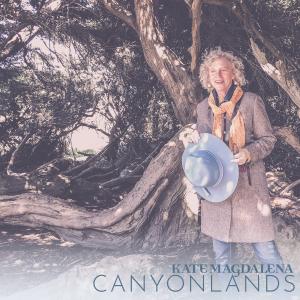 “Canyonlands are calling us, can you hear the sounds? ” New Music by Kate Magdalena

The Sixties made its imprint on almost every aspect of our lives, changing the world from one bound in some fundamental ways, to one that became freed of some, if not all, of those bindings. From models of beauty, and social mores, to political, economic, and spiritual openings, there was a sudden expansion of authentic expression. One of the seeds of that new expression was Laurel Canyon in Los Angeles where Joni Mitchell, David Crosby, and Steven Stills lived for a time and worked together.

Laurel Canyon is the inspiration for Kate Magdalena’s newest song “Canyonlands.” The song grew out of the very special influences that made Laurel Canyon a cultural birthplace of the 1960’s. Jacob Dylan’s film Laurel Canyon evoked the unique combination of sixties elements that inspired Kate’s song. Magdalena has been deeply shaped by that music, and still having a voice to sing with, she has the heart to bring something of those times to these through her new song “Canyonlands.”

You can hear the song on most digital platforms beginning Friday, July 16. The song was produced by Billy Smiley of Northern Shore Productions in Franklin, Tennessee, and features Jared Kneale on drums, Byron House on bass, Jonathan Crone on electric guitar, Blair Masters on keys, and Brennan Smiley on acoustic guitar.

Canyonlands is the title track for Magdalena’s upcoming album CANYONLANDS out this fall. The chorus of the song calls out “Canyonlands are calling us, can you hear the sounds, traveling the sands of time from eucalyptus grounds.” Kate is aware of the poignant passage of the times from then until now, and how the lessons of those earlier times call for our listening today: lessons of peace and love, and of living in harmony with nature. The artist is looking forward to the return of freedom to California, the home to so much freedom of expression, and her musical work is dedicated to the return of freedom throughout the world.

Magdalena feels a calling to bring her sounds and perspectives to music that enlivens, and brings awareness. She has produced two albums with Billy Smiley, A Larger Dance, and The Water Is Wide, as well as a Christmas collection In the Bleak MidWinter. These are all available on Spotify, Apple Music, and other digital networks.

To hear and purchase “Canyonlands”: https://smarturl.it/canyonlands

To hear more of her music, and to receive a free download of Kate’s sounds, visit https://katemagdalena.com, and stay in touch for more music to enrich your life.