Famous engineer and dam builder J.C. Boyle documented a naturally formed 31-foot-tall lave dam that was holding back a lake in 1913 during the contruction of Copco 1 dam. No migratory fish could get past this natural dam. 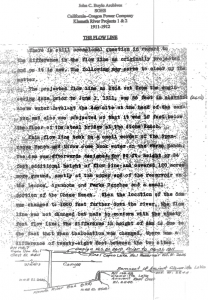 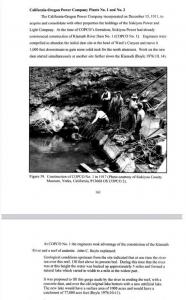 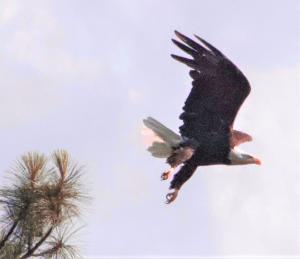 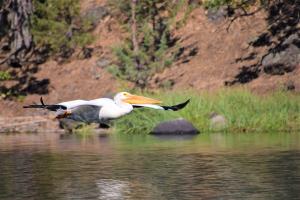 The mirgratory American White Pelican has critical habitat on Copco Lake (formed by Copco 1 dam). They are protected under law (AB-454) in California. Photo: M. Gough

Salmon migration on the Klamath River was prevented beyond Ward Canyon by natural forces that have been in-play for millions of years, and right up until the time Copco 1 dam was built.”
— Richard Marshall – President, Siskiyou County Water Users Association

The grossly understated costs and liabilities that would be shoved upon the weary shoulders of taxpayers, coupled with a real potential for serious and widespread environment damage, makes this project reckless at best.

The key reason that has been widely promoted as the logic behind the removal of the four structurally sound Klamath River Dams is that they are blocking the migration of salmon. This idea has been the conjecture of the minority consensus.

There is no hard evidence of any historic salmon migration past Ward Canyon on the Klamath River, which is the present-day site of Copco 1 dam.

In fact, the evidence is literally ‘rock-hard’, as in a naturally-formed 31-foot-tall lava dam that existed for millennia, and was present in 1913 and holding back water in a lake called ‘Clammittee Lake’, at the time construction began on the Copco 1 dam, according to a drawing and narrative by famous engineer and dam builder, J.C. Boyle.

Over the course of the past millions of years, there were natural dams formed by lava flows that, in addition to the 31-feet-tall dam, blocked the river. All of these naturally occurring high dams were impassable by any salmon runs. One of those naturally formed dams was a 130-feet-tall and formed a large lake, named ‘Clammittee Lake’ which is present day Copco Lake.

“Some argue that lava flows now submerged by the dams have stopped many salmon migrating farther upriver since time immemorial. This is why salmon don’t appear in upriver ancestral stories of the Shasta Nation, an indigenous group in the area, says its chief, Roy Hall. He attributes the dwindling salmon more to global warming, and calls the removal of the dams “environmental madness”. Once the lakes are drained, he fears that Shasta burial sites now underwater will be desecrated by pottery hunters.”

The area of the Klamath River that is being targeted by the fishery-zealots happens to be the ancestral homeland of the indigenous Shasta Nation.

Salmon Runs Failing Due to Ocean Conditions and Wildfires, Not Klamath Dams

The culprit in failing salmon runs, along with changing ocean conditions, is the heavy post-wildfire silting-in of the spawning gravels (aka ‘redds’) in the Klamath river and its tributary stream beds that suffocates the deposited fish eggs in the late fall and early winter.

“Scientists believe that the ground failure is associated with the wildfires that have devastated California in the past years. The absence of vegetation makes the absorption of rainwater impossible and results in extensive floods and in debris flows like the one that triggered the current failure. The area of the collapse lies near a region that was impacted by the Dolan fire (August 2020) and received more than 15.75-inches of precipitation.

Facts prove that the budget that Klamath River Renewal Corporation (‘KRRC’) has been selling everyone is dangerously insufficient!

The recently formed shell corporation called the Klamath River Renewal Corporation (‘KRRC’), was created to shield the profitable Pacific Corp (a Warren Buffet – Berkshire Hathaway company) from what they recognized as an unlimited liability associated with tearing down the dams on the Klamath River.

‘Klamath River Renewal Corporation’ is an interesting name for a non-profit whose sole mission is to protect the profits of a wealthy company, while destroying the four dams and the environment in the Klamath River Basin. It’s part of the overall charade.

KRRC has pitched a $450-million budget (“guaranteed budget”) as being adequate for the proposed project. However, this is an ambitious project that is in fact the world’s largest ever dam removal project to remove four dams on the wild and scenic Klamath River Basin.

There is also no doubt that the proposed project is laden with huge risks and obstacles that have never seen before at every phase. That risk and massive liability is like a ‘hot potato’ that Pacific Corp dumped right into the laps of American taxpayers.

“As part of the January 13, 2021 transfer application, the States of Oregon and California have agreed to be co-licensees with the Renewal Corporation; thus, the States will not be shielded from liability.”

Risks in large projects can be partially mitigated by having generous budgets. However, in the case of the world’s largest proposed dam removal project, being subject to what can be easily argued as a grossly inadequate budget, we find a perfect recipe for project shortcuts leading to the potential for a huge environmental disaster, a massive budget shortfall and the resulting unexpected extreme liabilities for taxpayers. This is in addition to numerous other known and unresolved issues related property damage and devaluation, among the list.

We have already seen smaller project outcomes that spell disaster for the massively underfunded KRRC dam removal budget, which puts Oregon and California taxpayers on the hook, for what could be a massive financial liability at a time when state budgets are strained to the max from wildfire disasters and COVID economics.

“Removal of the Elwha Dam began in September 2011 and was finished in spring 2012, ahead of schedule. Removal of the second dam, the Glines Canyon Dam, was completed on August 26, 2014. The dam removal process was originally projected to last two and a half to three years. The estimated cost of removing both dams was $40 to $60 million. The total cost of the Elwha River restoration is approximately $351.4 million.” ~ Wiki

Another accounting of the ‘projected costs’ regarding removal of the two Elwha dams, a smaller and simpler dam removal project, compared to the actual costs should be a red-flag for the costs of the much larger and far more ambitious project and estimated budge of $450-million to remove four Klamath River dams:

Budget for Klamath Dam removal project pitched by KRRC was already obsolete prior to 2020 and due to the impact of COVID economics.
The budget for the removal of the four (4) dams on the Klamath River was calculated using economic costs and metrics that were already many years old prior to the beginning of COVID economics, which began in 2020.

Of course, anyone in business knows that if projected costs are based on a ‘best case’ outcome, and a mediocre, or worse yet, a bad outcome evolves, costs, damages and liabilities can escalate very quickly and steeply.

There’s no doubt that dam construction, and dam destruction requires much of the same skills, heavy equipment, materials, labor, fuels and insurance; therefore, the comparison is valid.

The Associated General Contractors of America has issued a new report and graph-analyses showing the huge impacts that COVID economics (period April 2020 thru February 2021) has had on skyrocketing costs related to construction projects.

The Associated General Contractors of America study exemplifies the huge cost increases and long delays that have only recently occurred, and certainly years-after KRRC’s budget projections for their dam removal project were calculated.

For the purpose of cost-impact analyses, the COVID economics study began in April 2020 thru February 2021. (https://www.agc.org/sites/default/files/AGC 2021 Inflation Alert – Ver1.1.pdf).

“The construction industry is currently experiencing an unprecedented mix of steeply rising materials prices, snarled supply chains, and staffing difficulties, combined with slumping demand that is keeping many contractors from passing on their added costs.

This combination threatens to push some firms out of business and add to the industry’s nearly double-digit unemployment rate. The situation calls for immediate action by federal trade officials to end tariffs and quotas that are adding to price increases and supply shortages.

Officials at all levels of government need to identify and remove or lessen any unnecessary or excessive impediments to the importation, domestic production, transport, and delivery of construction materials and products.

Project owners need to recognize how much conditions have changed for projects begun or awarded in the early days of the pandemic or before and to consider providing greater flexibility and cost-sharing. Contractors should become even more vigilant about changes in materials costs and expected delivery dates and should communicate the information promptly to current and prospective clients.

This report is intended to provide all parties with better understanding of the current situation, the impact on construction firms and projects, its likely course in the next several months, and possible steps to mitigate the damage.”

In consideration of the foregoing and other budget-influencing factors; the half-decade-old KRRC budget of $450-million, if properly adjusted for inflation over the past 6-years, and adding in greatly increased costs related to ‘COVID economics’, would conservatively represent a budget of $900-million, if all goes perfect.

This brand-new report from the Associated General Contractors of America report spells financial disaster for KRRC’s project. And the burden of that disaster will surely fall upon the weary shoulders of California and Oregon taxpayers.

If consensus minority groups can work-around obtaining Congressional approval for nullifying the effect of the Klamath River Basin Compact Act, what Congressional act will fall prey to such shenanigans in the future?

If the destruction of the Klamath River dams and lakes created by the Klamath River Basic Compact Act (‘Act’) is allowed to happen, it sets a dangerous legal precedent that erodes the American democratic process and the power of the U.S. Congress.

The proposed destruction of the water related resources created under that Act, would deprive Americans of the Congressionally enacted ‘beneficial uses’ stemming from the 45-billion gallons of fresh water stored in Copco and Iron Gate Lakes. That reserve of water, which is precious to human survival during the current extreme drought and wildfire conditions, was provided under the auspices of the Klamath River Basin Compact Act, which states:

“The provisions of said Klamath River Basin Compact are as follows:

The major purposes of this compact are, with respect to the water resources of the Klamath River Basin:

B. To further intergovernmental co-operation and comity with respect to these resources and programs for their use and development and to remove causes of present and future controversies by providing (1) for equitable distribution and use of water among the two states and the Federal Government, (2) for preferential rights to the use of water after the effective date of this compact for the anticipated ultimate requirements for domestic and irrigation purposes in the Upper Klamath River Basin in Oregon and California, and (3) for prescribed relationships between beneficial uses of water as a practicable means of accomplishing such distribution and use.”

If the dams are removed, the loss of the clean, hydroelectric power from the Klamath River dams that supplies electrical service to 70,000 homes and businesses in Oregon and California would be gone. If these dams are senselessly removed, those businesses and homes will end up using electricity coming for the burning of fossil fuels, and thereby accelerating climate change.

The intentional destruction of habitat critical to the survival of numerous species of flora and fauna as well as the ‘incidental take’ of at risk birds during the proposed dam removal project is an ecological and environmental travesty and is illegal.

Both Copco and Iron Gate Lakes are critical seasonal habitats for numerous migratory birds, both game birds and non-game birds, as well as the habitat for numerous native species of birds. And during the growing drought and ‘water crises’, these fresh water lakes are becoming far and few between, forming an oasis of life.

The newly passed bill, Assembly Bill 454, changes sections of California statues that historically deferred to the Migratory Bird Treaty Act now making it clear that the incidental but avoidable killing and loss of migratory nongame birds is still against state law. The National Audubon Society endorsed the measure.