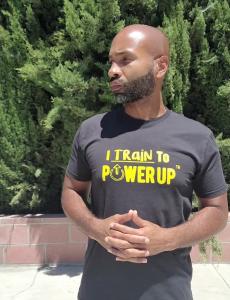 Coach POWER UP feels that his process will assist in filling in those gaps (caused by voids created during the COVID-19 Pandemic). Question is: What is his process?”
— Coach M.D. “POWER UP” Alexander

ORANGE COUNTY, CALIFORNIA, UNITED STATES, June 27, 2021 /EINPresswire.com/ — In 1998, Cleveland, Ohio native Malachi El-Kush (born Michael D Alexander) had a plan to use the music industry to spread word about holistic health while gaining the capital to acquire land for a self-sufficient community. That didn’t happen. Instead, between 2000 and 2003, Michael ended up being convicted and sentenced to a total of 10 years in federal prison. Where most people, especially Black Americans, are made worse or broken by the penal system, his time away allowed Michael to work on himself while assisting others’ journeys to find their true wellness and happiness. First, he had to address his psychological traumas.

Based on research and data analyzed by Mental Health America (mhanational.org):

– Black American people living below poverty are twice as likely to report serious psychological distress than those living over 2x the poverty level.

– Adult Black Americans are more likely to have feelings of sadness, hopelessness, and worthlessness than adult Whites.

By the time Michael completed his prison sentence in 2010, he had accepted mental health counseling to address issues from his past, received dozens of certifications in disciplines ranging from drug abuse counseling to personal training, and completed a college program for Business Administration with a 4.0 GPA. In addition, he wrote a 300 page book that was later broken up into three separate releases via Amazon.
All of this was done while Michael helped dozens of convicts with losing excess body fat, improving health metrics, and overcoming mental disorders such as depression.

After 10 years of reflecting, learning, and maturing, Michael was officially released from federal custody in January 2011.
At the age of 43, following another decade becoming a renowned trainer, community activist, and leader in the fitness industry, Michael relocated to Southern California for a new life as a father and soon-to-be husband. He was excited by the prospect of this new chapter in his life but, a month after his arrival, COVID-19 brought the world to a screeching halt. Those life altering moments provided Michael with the opportunity to answer two questions that had been re-emerging over the years for him:

1. What are you truly here to accomplish?
2. Are you ready to share with the world what you’ve experienced and learned in your life, so far?

Knowing the answer, Michael (now Coach POWER UP) designed an online wellness program that can be used anywhere, anytime, and by anyone to achieve the transformation that they need in their lives like he accomplished through all of his trials and tribulations. With the changing views on life ushered in by the COVID-19 Lockdown response (including perceptions of beliefs, cultural traditions, and definitions of success) a lot of people created voids. Coach POWER UP feels that his process will assist in filling in those gaps. Question is: What is his process?

“The key is to progressively align your holistic self (whole being). This process is mediated through the body’s chemical reactions (hormonal and neurological systems) via spiritual, mental and physical activities. While the soul is your essential energy, the body is your interaction with the environment around you. The two are able to communicate via the mind. My program provides guidance in practically addressing all three as a unit,” says Coach POWER UP

To learn more details about Coach POWER UP’s story and use his system, please visit our website.