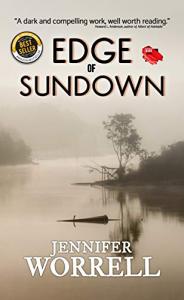 Sometimes watching the news I don’t recognize where I am anymore,” she said. “What if there were a covert society who judged when you ceased to belong?”
— Jennifer Worrell

CHICAGO, IL, UNITED STATES, June 1, 2021 /EINPresswire.com/ — When dystopian fiction becomes real, can one man make the right choice? Or will it be too late?

Dark fiction author Jennifer Worrell of Chicago debuted her crime/suspense novel Edge of Sundown with Darkstroke Books. It became an Amazon Bestseller in January.
Set in Chicago, Edge of Sundown is a contemporary story about Val Haverford, an aging novelist whose last attempt at a best-seller catches the eye of extremists. Reading his dystopian conspiracy theory as an exposé, they seek to end his career. When their attempt to silence him proves unsuccessful, they ramp up their efforts, slowly destroying everyone Val holds dear. With time running out, Val realizes he must expose his attackers before his fiction becomes truth. Edge of Sundown is a provocative story that shows how the desperation of lost opportunity can lead to drastic and unexpected consequences.

Howard L. Anderson, author of eight books including Albert of Adelaide and Soledad called this book “a dark and compelling work.”

Worrell said she enjoys books and movies with older protagonists and those who feel lost in their own worlds. “Sometimes watching the news I don’t recognize where I am anymore,” she said. “What if there were a covert society who judged when you ceased to belong?”

Worrell, assistant to the dean of libraries at Galvin Library (Illinois Tech), has been publishing short fiction and essays in such venues as Writing Disorder, Write City Magazine, Raconteur, and many others for seven years prior to the release of Edge of Sundown. When asked why she’s drawn to dark themes, Worrell replied, “Humans are such complex creatures, capable of almost anything. Dark fiction gives me an outlet to disturb and unsettle the reader while twisting expectations.”

Edge of Sundown is available on Amazon as paperback and e-book, on Etsy, and at Quimby’s Bookstore, Transistor, and Uncharted Books.

Currently, Worrell is working on a second novel, a handful of picture books, and a collection of short stories and essays. The desire to write in every genre is firmly stuck in her craw.

Worrell is available for interviews and signings. Please contact her at jworrellwrites@gmail.com.