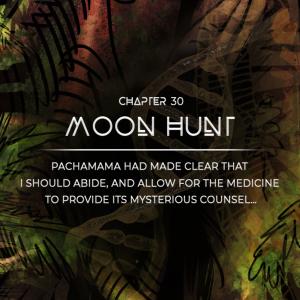 A Tiger never loses its stripes because it never stops being a Tiger…”
— C.W. Männe

In this chapter, The black pond is C.W.’s PURE CONSCIOUSNESS AT REST. This is where the medicine can take the user. His final battle to capture the moon is filled with all of his demons. His fear of loss, his fear of being alone, his fear of losing all of his accomplishments, his fear of not being in control. and his fear of death. All of these things, which he has spent the novel making peace with, all attack him at the same time and place…at the center of his own being.

Sir David said “The climax of the story is about the importance of fusion. It’s about harmonizing. Man meets medicine. Man meets nature. Man must balance the warrior and poet within himself. C.W. is forced to rely on answers that exist beyond his understanding. He must be faithful and assume that an answer will come. If you’d seen him as I have so many times, covered in animal skins and war paint, you wouldn’t think of him as anything but a savage. In truth, the closer you get to C.W., the more clearly he is a portrait of the poetic warrior.”

Mahne simply said, “A Tiger never loses its stripes because it never stops being a Tiger…”

The Grangita is called Savage.

Book reviewers, bloggers, journalists, and other media contacts who would like to receive a copy and/or schedule an interview with the authors can email inquiries.

Click here to get a Free Audible copy of ‘Lives and Minds of C.W. Männe BINGE.’