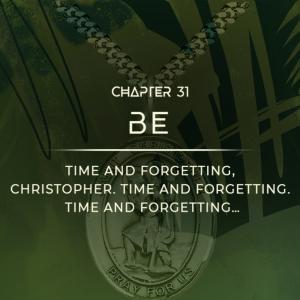 In this chapter C.W. sees in his own reflection, the many faces and people who have made him who he is. His Grandmother MUZZY…His Father….The Lost Boy inside of him…Each of them is taken over by THE BLACK CAT, meaning that those people and energies have SURRENDERED to DEATH… It is the way of things, but it is painful. Finally, from that deepest part of his consciousness, the GREAT BLACK CAT emerges. In a final battle, C.W. will surrender to the
force of the monster…finally wearing both ‘the body of man and the head of beast.’ This is a symbol of his unification with life and death. He is fully integrated as a spiritual being. He is both things at once, life and death. His solving of the riddle by capturing the moon is C.W.’s final passing of the test, which is to prove that he is equally developed as A POET AND SAVAGE. HARMONY… PEACE…

Sir David said “The last leg of this adventure is about C.W.’s integration. C.W., who has been thoroughly tested, will take his accumulated experience into an epic final battle, which in his case is ‘to capture and deliver the eclipsing moon.” In real life, his preoccupation with death and the unresolved traumas of childhood had to be resolved, so that he could finally be freed. The ultimate testimony of C.W. is in his harmonizing animal and poetic potentials, using the resulting combination to produce an extraordinary life. The C.W. we see today I would describe as ‘the sort of man who is himself at all times.’ It may sound trite, but as each of us examines himself or herself against this same standard, most of us fall well short. As he writes in this chapter, his triumph comes unexpectedly, as it is not the warrior who has slain the moon, but the poet instead.”

Mahne simply stated, “Feel the fear and do it anyway…”

Book reviewers, bloggers, journalists, and other media contacts who would like to receive a copy and/or schedule an interview with the authors can email inquiries.

Click here to get a Free Audible copy of ‘Lives and Minds of C.W. Männe BINGE.’