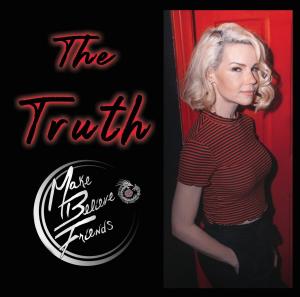 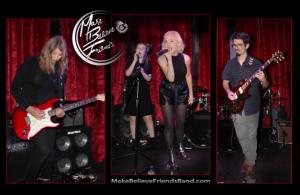 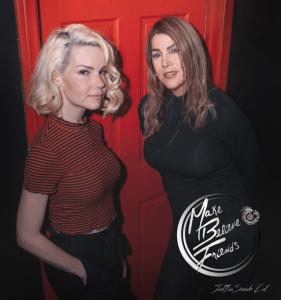 Make Believe Friends (aka Lunden Reign), is an all original alt-rock band based out of Los Angeles, California. Laura & Mindy have already released 6 singles to critical acclaim.

“‘The Truth’ is filled with lyrically packed intensity matched with a driving bass beat and offset by a wonderfully melodic chorus, delivered by Mindy in a variety of outfits, which is fun to watch.” – Warren Kurtz – Goldmine (Music Magazine)

About “The Truth” by Make Believe Friends (Lyrics by Mindy Milburn)

“The Truth” is about the moment you realize you are enough exactly how you are, and the empowerment that it brings to be able to speak your mind, question the world around you and confront difficult situations. And in return you want the same from others around you- for them to be honest, upfront, their true-selves.

The idea of being comfortable just being ourselves, unentangled from the pressures of modern society gives the opportunity to be as pure and free as the ocean air. It is The Truth.

I’m not gonna hold my tongue anymore when someone,
Just for fun makes a mess that can’t be undone.
I’m not gonna turn away, make believe it’s ok,
I’ll tell’ em straight, call it out when a spade’s a spade.
I don’t want to turn my trust into lust I might bust a fake is fake,
but I’m good at hiding disgust.
I don’t wanna make amends play pretend to no end
you’re not my friend and you don’t care about me in the end.

Now I know better than ever before,
In life you gotta break down doors
Can’t please’ em all that’s what lessons are for,
Let the truth hurt ’em even more, than your words…

About Mindy Milburn:
Mindy has a passion for all performing arts- starting out as a ballet dancer and actress, & eventually finding her voice and passion for songwriting and music. Originally from Cleveland Ohio, she has performed in numerous musical theater productions & indie films and was also a member of the Cleveland Cavaliers Dance Team. Mindy made the move to southern California to follow her dream of becoming a recording artist and feels very blessed by the opportunities that have come her way. In addition to singing lead vocals for Make Believe Friends and Lunden Reign, Mindy also performs with a No Doubt and a Madonna tribute band.

About Laura Espinoza:
Laura is a songwriter/guitarist, playwright, and TV producer. Laura recently won a NARAS (Grammy) songwriting contest. She has performed on stage with Luis Maldonado (Train), Terri Nunn (Berlin), Dale Bozzio (Missing Persons) & Prescott Niles (The Knack) and started her career with Matt Sorum (Guns n’ Roses). She has recorded at Capitol Records, Hollywood, Abbey Road, UK and is the host of “The Rock Radio Show” on KBU-FM, Malibu. Laura is also the recipient of 3 Emmy Awards.