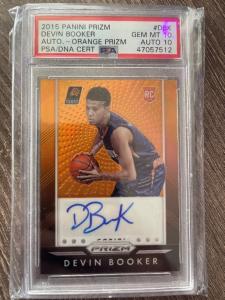 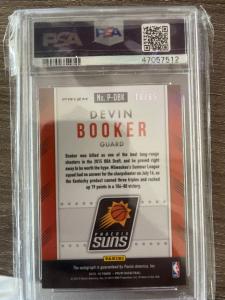 The owner of Next Level Entertainment is particularly seeing an increase in the sale of Devin Booker cards.

SPRINGFIELD, VIRGINIA, UNITED STATES, July 14, 2021 /EINPresswire.com/ — Owner of Next Level Entertainment, Mic Mess, is announcing that he is seeing a dramatic increase in the number of investors wanting to purchase NBA sports cards, particularly those of Devin Booker.

Devin Booker, Kobe Bryant’s protégé and who some say have the same footwork and basketball IQ as the star, has become a household name during this year’s playoffs and NBA Finals Run. In his first playoff of his young career, Booker is averaging 26.3 ppg, with an FG % of 48.8%. At 24 years old, the Kentucky standout has a chance to lead the Phoenix Suns to their first ever NBA Championship. This is a huge opportunity for a franchise who has an electric fan base, as seen in the NBA Finals thus far against the Milwaukee Bucks.

“Averaging 22.7 ppg in the NBA Finals, which includes a Game 3 performance that netted Booker just 10 pts in the outing and who sat out for much of the second half of the game for rest,” says Mess. “Booker is still an odds-on favorite to win the Finals MVP, should he help carry this this Phoenix team to a championship. Giannis Antetokounmpo who has a historic outing in Game 3, stands in his way as some say the momentum has shifted Milwaukees way.”

According to Mess, Sports Card investing saw a huge uptick last year during the pandemic, when many chose to step into the ageless hobby, and many have seen some amazing ROI’s.

“While guys like Luka Doncic, Michael Jordan, Lebron James, and Devin Bookers mentor Kobe Bryant have seen a tremendous surge in pricing, each having cards that sold for 1 Million Dollars,” Mess states. “Some would argue that right now is the time to invest in Devin Booker. For example, our very own Ebay user, Nxtlvlcollecting, seems to be thinking the same way. He predicts the series will go 7 games, and ultimately the Suns will pull this out in front of their home crowd Thursday, July 22nd – a game in which Devin Booker cements himself as the NBA Finals MVP.”

“Currently listed as of Monday, July 12th, is a rare 2015 Panini Prizm Autographed Devin Booker Orange Prizm card serial numbered to just /65,” Mess continues. “What makes this card magnificent is the fact its graded from PSA as a 10, and a 10 autograph, making this the only card on the planet with these credentials. The Orange background is a rare find, that goes beautifully with the Phoenix Suns uniform. This card was purchased for just over $15,000, and I expect it to sell for somewhere in the 20k range. This would be a steal for a collector looking to commemorate the Phoenix Suns run this year. If this were a Luka Doncic card it would already be worth over $100,000 without a question. Devin Booker, who is just becoming a household name, is on the brink of an NBA Championship and is dating A-list celebrity Kendall Jenner of Keeping Up with The Kardashians. This means his stock is on the rise.”

“The NBA Finals generates national media coverage, and the one thing we can count on is the guy who once scored 70+ points in a game, one of only 2 others to score that many including his Mentor Kobe Bryant, isn’t done making headlines just yet,” Mess states. “The 2-time all-star has a legendary point guard in Chris Paul playing alongside him, and the pair are on an historic run. Investments in NBA cards will only continue to grow into the future.”

To track the auction of Booker’s rare card before July 22nd, please visit https://www.ebay.com/itm/353571655699 or visit nletalent.com for more information about the company.