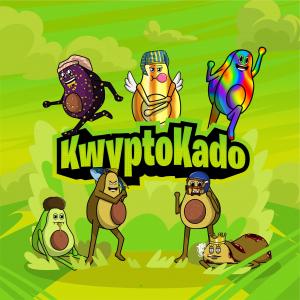 NEW YORK, NY, UNITED STATES, September 28, 2021 /EINPresswire.com/ — The average millennial has less than $15,000 in savings according to a survey by the Bank of America. Conventional wisdom says Americans should save for a rainy day but most are living paycheck to paycheck. In an unexpected turn of events, 73 percent of millennials are defying the mainstream idea that they are not concerned with their financial future by actively squirreling away their pennies.

Though many 20 somethings have plenty of disposable cash to blow on treats like avocado toast others are more serious with their money. Meet the team at Kwyptoland, a group of creatives, crypto enthusiasts, and tech geeks with a passion to build a steady financial future. The group of Gen Ys is changing the status quo with the launch of KwyptoKado NFTs. The clever idea comes from the popular saying “avocado toast is why millennials can’t afford to buy houses.”

The tasty morsels reached trend status in 2010 though it has graced café menus since the ’90s. Now the mere mention of avocado toast is equivalent to frivolous spending. In New York, the green mash goes for $24 and top chefs in California add white truffles to the mixture for a whopping $100 for the dish. Millennials eat these appetizers for breakfast, lunch, or dinner and with more than 1.2 million Instagram hashtags on the subject, it is safe to say the obsession is growing.

Now, Kwyptoland is seizing the opportunity to ride the wave on the avocado craze with these exciting, funny avocado depictions. These nifty green images are ripe with funny faces and colorful expressions. The set includes a golden avocado, rainbow-colored avocados, an angry avocado with red laser beam eyes, and a laid-back version complete with sunglasses, pineapple, and a halo. The light-hearted NFTs can be minted on Kwyptoland.com on the 14th of October, 7pm EST. If you’re lucky enough to be whitelisted, you can get ahead of the queue and purchase them on the 13th of October.

The worldwide team is assembled from countries all over the world such as Australia, United States, the U.K, Canada, Germany, Ukraine, Turkey, Indonesia, and India. Together, they are forging a “friendly war” against boomers. The KwyptoKado movement will show the world that millennials are the future. Could this be the next CryptoPunk or Bored Ape in its own category?