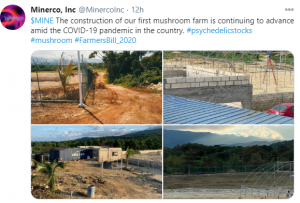 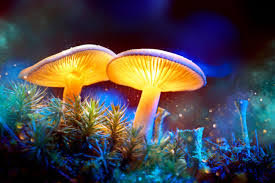 mine the magic mushroom company 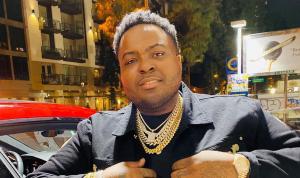 MINE expects 100 million subscribers through Amazon, Roku & Apple TV as well as its own channel, SHRUTV.com. The concert itself will be available for $20 in SHURCOINS at www.shrucoin.com”
— MINE CEO Julius Jenge

On April 19thMINE announced that American rapper and songwriter, Bobby Shmurda, has selected the MINE blockchain, a technology that enables cryptocurrencies such the MINE SHRUCOIN (www.shrucoin.com) to bypass traditional sales channels, as the platform for fans to purchase tickets to his first concert after serving a six year prison sentence.

The concert, featuring Bobby Shmurda and Rowdy Rebel, will be released on June 19th as part of a docudrama to a combined global viewership of over 100 million subscribers through Amazon, Roku and Apple TV as well as its own channel, SHRUTV.com. The concert itself will be available exclusively to concertgoers who have purchased a ticket for $20 in SHRUCOINS at www.shrucoin.com, which is owned and operated by MINE. According to initial estimates, MINE believes a minimum of one million tickets will be sold primarily in North America, the Caribbean and Africa to this historic event, which is expected to result in record financial contributions to MINE for the 2nd fiscal quarter and current fiscal year ending Dec. 31st.

On May 17th MINE announced that the largest musical artist in Africa, Davido, will be joining American rappers and songwriters, Bobby Shmurda & Rowdy Rebel to appear in a June 18th global live streaming concert. Ticket sales are projected to reach 1 Million worldwide. Tickets are selling via the MINE SHRUCOIN, an m-PESA’s Phone Based Mobile Money Transfer Service.

The concert will be released as part of a docudrama to a combined global viewership of over 100 million subscribers through Amazon, Roku and Apple TV as well as MINE channel, SHRUTV.com. The concert itself will be available exclusively to concertgoers who have purchased a ticket for $20 in SHURCOINS at www.shrucoin.com, which is owned and operated by MINE. A minimum of one million tickets are projected to be sold primarily in North America, the Caribbean and Africa to this historic event, which is expected to result in record financial contributions to the MINE bottom-line both for the second fiscal quarter and current fiscal year ended December 31, 2021.

On April 7thMINE announced that it expects to be the first Company in the Magic Mushroom industry to open an entire facility dedicated towards the distribution of its micro dosing product lines in addition to the CBD and Delta 8 products, amongst others, that will also be distributed by WLLCO, a white label CBD company that MINE acquired in March.

MINE initially announced on March 29th it had finalized a lease that will enable them to clearly solidify its position as the first mover in the nation’s rapidly emerging and highly lucrative Magic Mushroom industry.

This was a strategic maneuver by MINE as Ann Arbor’s local policy allows for psilocybin decriminalization. By establishing a presence in a market that has already expressed interest on the benefits of psychedelics, MINE expects to produce medical mushrooms strains like Chaga and Lions Mane as well as begin testing the waters for Psilocybin in the first decriminalized location in the Midwest. Ann Arbor Michigan has led the charge in Cannabis now psychedelics.

 MINE Acquires Over $2M Of Revenue from White Label CBD Company

MINE leadership further announced the company’s four critical goals at the Sankofa Shareholder and Vision Summit held on January 24, 2021:

On March 3rd MINE announced that it has retained Investor Relations Partners (IRP) to provide investor relations and capital markets advisory services.

The current year should be one of the most historical for the psilocybin mushroom industry and, as a result, the most pivotal for MINE and its shareholders. The favorable economic and business climate should create a unique opportunity for MINE to achieve record growth rates so management looks forward towards the support and guidance of Investor Relations Partners to effectively communicate this growth story to the investment community.

IRP’s primary function will be to help disseminate and maintain contact with the financial community, including shareholders, investors and other stakeholders for the purpose of increasing awareness of MINE, its activities and to ensure the most accurate information is consistently being communicated as it relates to the company’s growth story.

On February 28th MINE announced that musical icon, Sean Kingston, has joined the company’s mission through their ambassador program. This decision comes at a strategic time for the botanical sector with the upcoming launch of blockchain token SHRU. Kingston, who is of Jamaican origin, has witnessed the medicinal benefits that plants such as psilocybin and cannabis provide, as both are legal in Jamaica and are commonly used for treatment methods.

Kingston, who has over 1.2 million Instagram and 2.9 million Twitter followers, brings to MINE a strong network people who view him as an innovator or trendsetter. As a result, he will be able to use these social media platforms and other channels to help raise awareness on the company’s overall mission to educate the masses on botanical products such as cannabis or psilocybin. By partnering with a global figure of Kingston’s stature, the MINE reach can broaden exponentially, especially with their blockchain token SHRU being available to the public come March 1, 2021.

In response to the announcement of his affiliation with MINE, Kingston made this statement: “I have been building a relationship with Minerco for a while as I am 100% behind in their mission as a company. In Jamaica, we have been using cannabis and psilocybin for medicinal purposes for years now and have seen the positive effects that it can have on people who suffer from physical and emotional challenges. The anticipated launch of SHRU definitely accelerated the process in making our strategic partnership official, and now I am ready to help in any way possible. These are exciting times.”

There are two ways that MINE customers can utilize SHRU. They can either go through SHRUCOIN.COM and purchase the token or go through the application SHRUCOIN PAY where credit card payments are an option. Additionally, SHRUCOIN Pay will contain certain APIs for the application’s interface to connect with outside payment apps such as PayPal and Cashapp for purchases related to Cannabis and Psilocybin.

On January 25th PSYC, a digital media leader within the emerging sector of medicinal psychedelics, announced a Joint Venture Partnership MINE. The JV creates an opportunity for the companies to collaborate on the co-development and hosting of virtual conferences and forums focused on educating, informing, and showcasing the potential medicinal benefits of psilocybin mushrooms, including the psilocybin-based products MINE is developing. Additionally, the JV allows for PSYC to serve as one of the primary digital marketing partners for MINE as they move forward with their focus of bringing their products to market.

On January 11thMINE announced that Paul Hoonjan has been appointed as its new President. Hoonjan brings extensive experience, notably in the development and management of strategic opportunities, corporate alliances and bringing therapeutic products to market. For almost 6 years, Hoonjan has overseen Cannabis and Mushroom development in Runaway Bay, Jamaica managing international client base. Hoonjan’s expertise in shipping, contracting, negotiating, labor development, and building supply lines will reinforce MINE leadership in the emerging global market.

 MINE Signs LOI with Jamaican Firm Lazurus Holistic to Grow, Process and Extract Psilocybin and Cannabis for Export to Canada and Europe

On January 4thMINE announced a Joint Venture letter of intent with Lazurus Holistic to serve as psilocybin experts to grow and develop a unique strain of mushrooms specific to Jamaica. In addition, through the JV with Lazurus, MINE will inherit multiple cannabis licenses to grow, process, extract cannabis as well as psilocybin. This partnership will enable MINE to have a continuous supply of product to fill its 1 million microdots capacity daily. MINE plans to export its wholesale product to Europe and Canada, as well as create is own brand “DOTMINES.”

MINE and Lazurus Holistic plan to retrofit its 100 acre farm into a state of the art production facility that can produce over 5000 Mushrooms and 1000 Cannabis pounds monthly. Through this Joint Venture, the company plans to advance its operations into the Cannabis /CBD/Psilocybin white label market.

Lazurus Holisitic an expert in mycelium recently completed its first export of Psilocybin mushrooms to Mydecine Innovations Group Inc. in Canada. The MINE/Lazurus Joint Venture will expand to export globally. The market penetration is approaching $7 billion by 2027.

In addition, MINE will purchase manufacturing equipment to produce up 1 million tablets of psilocybin microdots daily that will be sold in legal markets, plus a line of medical graded mushrooms sold nationwide.

DISCLAIMER: FrontPageStocks/CorporateAds.com (CA) is a third-party publisher and news dissemination service provider. FPS/CA is NOT affiliated in any manner with any company mentioned herein. FPS/CA is news dissemination solutions provider and are NOT a registered broker/dealer/analyst/adviser, holds no investment licenses and may NOT sell, offer to sell or offer to buy any security. FPS/CA’s market updates, news alerts and corporate profiles are NOT a solicitation or recommendation to buy, sell or hold securities. The material in this release is intended to be strictly informational and is NEVER to be construed or interpreted as research material. All readers are strongly urged to perform research and due diligence on their own and consult a licensed financial professional before considering any level of investing in stocks. All material included herein is republished content and details which were previously disseminated by the companies mentioned in this release or opinion of the writer. FPS/ CA is not liable for any investment decisions by its readers or subscribers. Investors are cautioned that they may lose all or a portion of their investment when investing in stocks. FPS/CA has been compensated $500 by the company for dissemination of this Article.

These news releases and postings may contain forward-looking statements within the meaning of the Securities Litigation Reform Act. The statements reflect the Company’s current views with respect to future events that involve risks and uncertainties. Among others, these risks include the expectation that any of the companies mentioned herein will achieve significant sales, the failure to meet schedule or performance requirements of the companies’ contracts, the companies’ liquidity position, the companies’ ability to obtain new contracts, the emergence of competitors with greater financial resources and the impact of competitive pricing. In the light of these uncertainties, the forward-looking events referred to in this release might not occur.