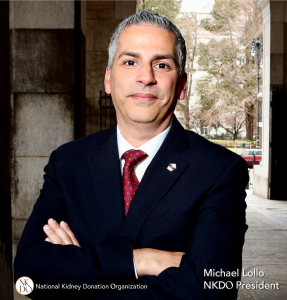 Michael Lollo is a 21-year veteran of the New York City Police Department who donated his kidney to a stranger in 2018, through the National Kidney Registry (NKR). He donated at New York-Presbyterian Hospital Weill Cornell Medical Center. While with the NYPD and since his retirement in 2020, Michael has been an active member of NKDO. Since his donation, he regularly counsels potential living donors as well as recipients in need of a living donor kidney transplant.

Ned Brooks, founder and CEO of NKDO, said, “Since our inception five years ago, NKDO has grown to become the leading living kidney donor advocacy organization in the country. Our team of recipients and donors is now engaged nationwide in a wide variety of advocacy efforts. Last year we hired Lisa Emmott as our Executive Director to support the rapid expansion of NKDO. The growth in activity in 2021 suggests a very active future in which Michael’s proven leadership skills will make a big contribution to our mission of eliminating the waitlist for kidney transplant recipients.

Mr. Lollo will assume the title of President of NKDO effective August 1, 2021. About his new role, Michael said, “I never would have thought that my passion to advocate for living kidney donation would have led me to this moment. I am so honored and humbled to be asked to embark on this journey with Ned, Lisa and all of my fellow NKDO members. After 21 years of service in the New York City Police Department, I can only hope for another 21 years of service to NKDO and the entire living donor community.”