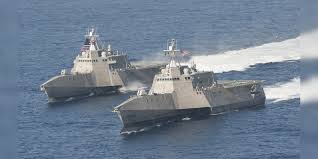 As you get to L&S, you’re starting to see that capability go beyond where the core combat system is not just doing self-defense, it’s now augmenting the capabilities of the mission package. So when it was originally designed … those core systems would do self-defense, they would do communications, they would do basic husbandry.

The four much-criticized ships now in service have boast little firepower: a 57 millimeter deck gun; two 30mm autocannon, and a MH-60 helicopter (with varying armaments). That leaves them badly undergunned for one of their core missions, defeating Iranian-style fast attack boats, and completely incapable of the other two missions, hunting submarines and clearing sea mines. But in 2019, 2020, and 2021

Increment three will involve adding the Fleet-class unmanned surface vessel (USV) with the unmanned surface sweep system (USSS), a cable towed behind the boat. Each LCS will carry two, and they will be used for both MCM and ASW. It will mimic the acoustic and magnetic signature of a ship to fool magnetic and influence mines into detonating; introduction is expected in 2017.