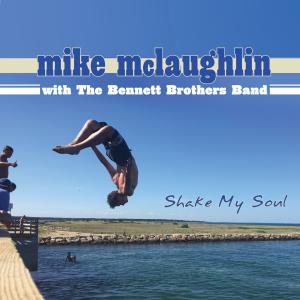 Brooklyn natives Mike McLaughlin and the Bennett Brothers have reunited for the first time in almost twenty years to bring their fans SHAKE MY SOUL.

BROOKLYN, NEW YORK, UNITED STATES, June 11, 2021 /EINPresswire.com/ — The new album which was released digitally on 5/29/2021 is a collaboration between the Brooklyn NY rockers and New Jersey’s own John Ginty (Allman Betts Band) who produced the record, and Anthony Krizan (formerly of Spin Doctors) who engineered the record.

SHAKE MY SOUL consists of 10 all-new original songs written by McLaughlin during the pandemic. The album kicks off with California Gold, a nod to the Laurel Canyon, CA music scene of the late 60’s and early 70’s, and winds through stories of unrequited love, struggle and redemption, culminating with the blues rocker, Ricochet. The initial rhythm tracks were recorded at Sonic Boom Studios in Raritan, NJ owned by Krizan and mixed and mastered at John Ginty’s own Shark Tank Studio in Bernardsville, NJ.

The band is made up of childhood friends from Brooklyn, NY who have weaved themselves in and and out of each other’s musical lives over the years and reunited during the pandemic to create something special and lasting. Their last outing found them sharing the stage with the legendary Levon Helm, performing several public shows as well as jamming for weekends on end while Levon was recovering from throat cancer at his barn in Woodstock NY. They consider that time a great honor and a huge part of their musical education.

If you would like more information about this release please use the contact info provided, thank you!