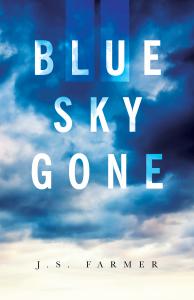 Twenty years have passed since the attacks of 9/11. We shall never forget the lives lost that day, as well as those who suffer from related illnesses today.

JACKSONVILLE, FL, UNITED STATES, July 20, 2021 /EINPresswire.com/ — BLUE SKY GONE- A timely and deeply moving novel set during the period of the 9/11 attacks in 2001, to be released in honor of the upcoming twentieth anniversary. BLUE SKY GONE aims to bring awareness to the debilitating illnesses affecting thousands of first responders to this day, as well as to honor all of the victims of September 11th, 2001.

Author J.S Farmer, a former police officer, and debut novelist set out to write this book in September of 2019, to coincide with the twentieth anniversary of 9/11 in September of 2021. The project was all but lost, grounded by a pandemic and move across the country, until her 9-year-old daughter picked up the half-written manuscript, read it, and begged her to write more. This reignited the author’s reasons for writing the book in the first place, to keep the memory of that day alive for future generations.

BLUE SKY GONE is a novel that blends the historical events of 9/11 with the fictional story of two sisters, who are on very different paths in life. Audrey is just beginning her career as a police officer in the year 2001, while Hannah, a young Wall Street hopeful, works in the South Tower at the World Trade Center. The unexpected events of 9/11 bring them together in a surprising way; one that ultimately comes down to life or death. This story of love, loss, strength, and courage, is an emotional voyage through a dark time in America’s recent history.

J.S Farmer will be donating a portion of the proceeds to the Tunnels to Towers Foundation in honor of the first responders, and the 9/11 Memorial Museum in honor of all of the victims of 9/11.

BLUE SKY GONE will be available on Amazon in late August of 2021.

More information and high-resolution photographs can be found at the author’s website at: jsfarmerauthor.com