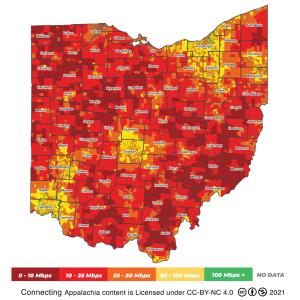 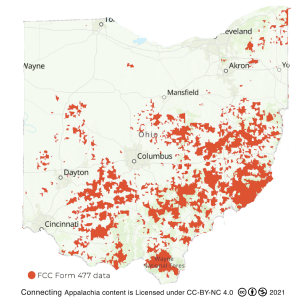 This map is based on form 477 data provided to the FCC by internet providers, and is not subject to verification. The claim is these are the households with access to <25/3 Mbps service 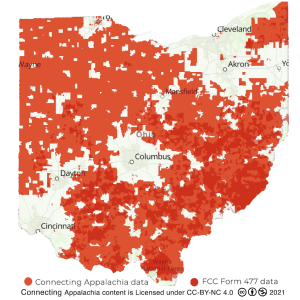 The map is based on independent speed test data from consumers 3.7X more than FCC claims

A new Ohio Broadband Availability map presents a stark view of the state’s broadband infrastructure: half the populated areas access the internet at <10/1 Mbps.

If you zoom in and see a few poor test results surrounded by a bunch of good ones that’s not an infrastructure issue. But when entire neighborhoods are below 10/1 Mbps, that’s definitely a problem.”
— Tom Reid

OHIO, UNITED STATES, July 13, 2021 /EINPresswire.com/ — A new Ohio Broadband Availability map released on July 8, 2021 presents a stark view of the state’s broadband infrastructure: If you don’t live in a city, you can’t get high speed internet. If you do live in a city, that’s still no guarantee.

The new map, developed by Reid Consulting Group on behalf of Connecting Appalachia, reveals that half of all populated areas in Ohio access the internet at less than 10 Mbps down/1 Mbps up. Two-thirds of the state is below the FCC minimum of 25 Mbps down/3 Mbps up.

“This is a real eye opener,” said Misty Crosby, Executive Director of the Buckeye Hills Regional Council. “We knew the need was great, especially in Appalachian Ohio, but this map makes it clear just how widespread the need really is.”

According to Tom Reid, President of Reid Consulting Group, the situation is worse than expected.
“We knew the FCC’s maps were wrong, but I don’t think anyone expected them to be this wrong.” Connecting Appalachia reports that the total number of households without broadband is close to 720,000, 3.7 times more than the FCC’s estimate of 190,000.

The difference comes down to data. According to Reid, the FCC bases its maps on unverified reports from internet providers, while the new Ohio broadband map uses data from millions of individual households. “We analyzed over 9 million speed tests,” said Reid. “Every one of those is a real person who used the Speedtest by Ookla® app to see how fast their internet was.”

The true extent of Ohio’s rural digital desert isn’t the only surprise in the new data. Bad service shows up even in densely populated urban areas like East Cleveland. “If you zoom in and see a few poor test results surrounded by a bunch of good ones,” said Reid, “that’s not an infrastructure issue. But when you see entire neighborhoods below 10/1 Mbps, that’s definitely a problem.”

Crosby is hopeful that the $190 million set aside for broadband in the state budget is a sign of things to come. “It’s a good start,” Crosby said. “But one look at this map, and it’s clear that we’re going to need a lot more to solve the problem.” Jeanette Wierzbicki, Executive Director of the Ohio Mid-Eastern Governments Association, agrees. “This is an economic survival issue for our region and our state. Broadband is like electricity or safe drinking water. Our communities and residents need access to reliable, affordable, high-speed internet in order to be economically competitive and to thrive in the modern world.”

The interactive map and methodology can be viewed at www.ConnectingAppalachia.com/mapping/