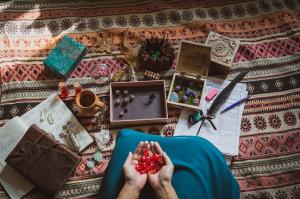 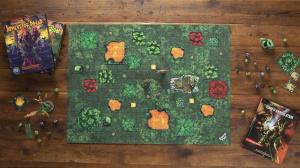 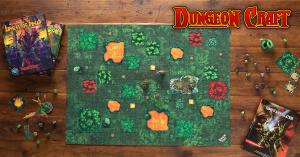 Dungeon Craft is a series of 2d terrain made for D&D and other role-playing games. Each book contains hundreds of reversible terrain pieces for you to build custom maps in endless scenarios. All you need to do is cut out the pieces and lay them on any map to build a unique encounter in minutes.

“We asked our community what type of terrain they wanted to see next, and the resounding answer was a jungle book,” said Jeremiah Crofton, Creative Director and Co-Founder of 1985 Games.

The two new books, “Fallen Kingdom” and “Jungles of Dread,” take players to the jungle. “Fallen Kingdom” visits dark dungeons, ancient ruins and unique terrain. “Jungles of Dread” focuses on the plant life and coastal cities found in the jungle. Both books also include some of the most iconic terrains from “Wizards of the Coast: Tomb of Annihilation” by Wizards RPG Team.

With the release of this Kickstarter, 1985 Games will have launched six total campaigns and brought numerous products to the market. Jungle-themed versions of some of the most popular items from those past projects will be brought back for this Kickstarter. The Kickstarter also brings back the Deck of Stories, 18 NPC Cards, Dungeon Notes and new models from Counterspell Miniatures. They’ll also be unveiling new and exciting products like the Jungles of Dread DM Screen and African Jasper D20.

Also included is the “Den of the Serpent King,” a brand-new adventure set in the wild jungles of Bagu. This free adventure is intended for four 3rd, 7th or 11th-level characters and can be played without any of the products from this Kickstarter, but works best when used in conjunction with them.
The Kickstarter also includes five new miniatures sculpted by Leavon Archer, with concept art by Inkognit. This time around, the team created three monstrous creatures to inhabit the “Jungles of Dread.” These creatures’ monster stats are found in the free adventure “Den of the Serpent King” and play large roles as the adventure’s main antagonists. Also sculpted are two characters from 1985’s NPC cards, Challa and Thema. Both are unique characters with amazing detail that play a role in the free adventure.

Each Dungeon Craft book contains hundreds of new, reversible terrain pieces, all of which work with wet and dry erase markers. The Kickstarter is just getting started with many more add-ons and stretch goals designed to enhance each of these books for the betterment of the table!
Fans of Dungeon Craft will have until July 24, 2021, to help bring this project to life!
For more information about the Kickstarter, visit https://www.kickstarter.com/projects/1985games/dungeon-craft-series-three-two-new-terrain-books-for-dandd

About 1985 Games
Founded in 2019 by a group of friends who hated drawing trees and buildings during their D&D sessions, 1985 Games was formed to create fun and affordable products for all gamers at every level. In their quest to make everyone’s gaming experience easier, they successfully Kickstarted their first two books: “Dungeon Craft: Volume 1” and “Dungeon Craft: Hell & High Water.” Since then, 1985 Games has gained worldwide distribution with their products on game store shelves around the globe. For more information, visit http://www.1985games.com or follow the company on Instagram, Facebook and Twitter. If you would like more information about this topic, please contact us at 503-358-6552 or info@1985games.com.