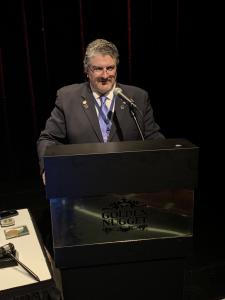 The NJAOPS leadership is honored to award the distinction of 2021 Physician of the Year to Antonios Tsompanidis, D.O. FACOFP.

Dr. Tsompanidis continues to bring our organization together with his engagement, personality and obvious love for his role in osteopathic healthcare in New Jersey”
— Tajma Kotoric

PLAINSBORO, NEW JERSEY, UNITED STATES, May 3, 2021 /EINPresswire.com/ — Every year in conjunction with our Atlantic Region Osteopathic Conference, we honor a colleague who has displayed extraordinary service to his or her community. This year, the NJAOPS leadership is honored to award the distinction of Physician of the Year to Antonios Tsompanidis, D.O. FACOFP.

Dr. Tsompanidis graduated from the University of Medicine and Dentistry of New Jersey School of Osteopathic Medicine (UMDNJ-SOM) in 1994. He completed his Family Medicine Residency at UMDNJ-SOM in Stratford in 1997 where he was Chief Resident. He got the nickname “Dr. T.” during his training at Our Lady of Lourdes Medical Center. He has been in private practice since graduation and a volunteer faculty member for the Christ Hospital Family Medicine Residency program and UMDNJ-SOM since 2000.

In 2009 he became an Assistant Professor of Family Medicine at UMDNJ-SOM , now Rowan University School of Osteopathic Medicine (RowanSOM), as well as the Director of Medical Education and the Program Director for the Family Medicine Residency at Christ Hospital. In 2016, Dr. Tsompanidis became the System Director of Medical Education for Christ Hospital and Bayonne Medical Center as well as the Program Director for the Transitional Year program at Bayonne. In 2018 he became the Chief Academic Officer for Christ Hospital and Bayonne Medical Center overseeing nearly 90 residents and fellows as well as nearly 60 medical students from RowanSOM. His Family Medicine Residency Program has maintained a 100% board pass rate since he became the program director.

Tajma Kotoric, Executive Director of NJAOPS, commented, “We are especially proud to announce this award, as Dr. Tsompanidis has remained an integral part of the NJAOPS family for many years. His contributions are immeasurable, as he has led as Past President and current Speaker of the House of Delegates. But beyond his leadership roles, he continues to bring our organization together with his engagement, personality and obvious love for his role in osteopathic healthcare in New Jersey”

Dr. Tsompanidis has been a lecturer at the Atlantic Regional Osteopathic Convention (AROC) since medical school and continues to lecture and assist in the Osteopathic Manipulative Treatment (OMT) workshop. In addition, he continues to be the AROC opening session moderator. He lectures nationally at both ACOFP and American College of Osteopathic Internists conferences on various topics including medical ethics and OMT and is an author on several medical publications. In addition, he has been the recipient of several medical and service awards including the rank of Eagle Scout, Outstanding Achievement awards for OMT and Family Medicine, the Alan Gartzman D.O. Memorial Award, induction into the American Osteopathic Association Mentor Hall of Fame, NJAOPS Service awards, UMDNJ-SOM Dean’s Appreciation Award, the rank of Fellow in the ACOFP and most recently a Teaching Dedication Award from RowanSOM. Dr. Tsompanidis is the current chair of the ACOFP Constitution and Bylaws/Policy and Organizational Review Committee, vice-chair of the ACOFP Resolutions Review Committee, and was the former chair of the ACOFP Ethics Committee. He is an Assistant Scoutmaster with Troop 331 in Holmdel and was a Den Leader with Pack 331. Annually he takes on the role of Scoutmaster for Troop 331 for their summer week at Forestburg Scout Reservation.

During COVID, he remained on the front line as his private practice (with his wife) never closed, providing care to their patients with in-person visits, telehealth, house calls and COVID testing as well as treating those with COVID. While not at the practice, Dr. Tsompanidis continued to support his front-line residents at Christ Hospital and Bayonne Medical Center with donations and personal purchases of critically needed PPE. His presence at the hospitals allowed him to make critical decisions with administration to create COVID resident teams which was noted in a CNBC article regarding the hospital’s response. These teams were part of the front-line physicians dealing with the intense COVID patient burden as Christ Hospital was a COVID epicenter. Being a hands-on leader, he met with his residents and faculty nearly every day at both hospitals to ensure that they were adequately supplied with PPE and to monitor the situation and adjust coverage accordingly.

In his “free time” and pre-COVID, he along with his wife DinaMarie Perrino, D.O. (UMDNJ-SOM ’94), enjoy travelling, participating in Scouting with their sons Antonios and Stephanos as well as attending the many baseball games and music concerts his sons are involved in both in and outside of school. The doctors maintain their private practice in Hazlet which was established in 1999 and serves as a rotation site for medical students and residents.