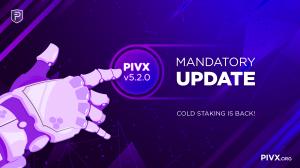 NEW YORK, NEW YORK, USA, July 8, 2021 /EINPresswire.com/ — PIVX, a cutting edge blockchain project and pioneer in cryptographic Proof of Stake financial data protection, is also an entirely community run and developed, open source project. The incredible developers of the project have just pushed the latest and greatest PIVX wallet, which has included Cold Staking. Cold staking (for those who do not know) allows anyone, anywhere, the ability to “stake” their PIVX coins and receive rewards (approximately 8% per year), while at the same time their wallet is turned off and coins are stored completely offline for the additional protection and security. This novel mechanism of earning while participating in the network is just one of the many features that makes PIVX a defacto gold standard of the blockchain sector, and will be activated on the enforcement block 2,927,000 (or around July 10th, 2021 at approx. 00:45 UTC).

The latest v5.2.0 binaries can be downloaded here:

And in the GitHub’s repository tag: https://github.com/PIVX-Project/PIVX/releases/tag/v5.2.0

The Complete list of changes and improvements are publicly available on PIVX GitHub here.

We also suggest everyone to read an official v5.2.0 Release Notes here.

What are the next plans after the v5.2.0 network upgrade?
Knowing that the Tor Project will be dropping support for their v2 addresses by August this year, PIVX Core Developer furszy already started working hard on PIVX’s solution, which will allow PIVX to fully support the newest generation Top v3 Onion addresses. No Small feat, this work is stacking up to be another huge 174-commit Pull Request coming from one of the PIVX Core Developers.

Work on the next big wallet release is already underway and progressing exceptionally well. With the v5.2.0 network upgrade happening now, it means that the next major network upgrade will be scheduled for sometime later this year. Having said that, expect that the next release will end up way bigger than it was initially planned.

As of right now, the next major release aims to introduce:
– an entire new system of the PIVX’s tier two Masternode network with the introduction of the very custom implementation of the Deterministic Masternodes (DIP3),

– Proof of Service for masternodes with the Long-Living Masternode Quorums (DIP6 and DIP7),
ChainLocks (DIP8),

– An entire budget system overhaul with the introduction of the new Governance Graphical User Interface (PR 2406),

– And more features can be seen by following the work publicly available on PIVX’s GitHub.

The other significant additions to the v6.0 which are still not publicly available will be revealed in the near future, making v6.0 the biggest network upgrade PIVX ever had.

Stay tuned and for now, enjoy the latest and best PIVX wallet to date!