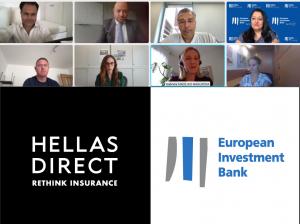 EIB and Hellas Direct representatives at the virtual signing ceremony

The EIB is pleased to provide EUR 15 million backing to accelerate pioneering digitalization driven expansion by Hellas Direct through our largest ever support for financial services in Cyprus.”
— Lilyana Pavlova, Vice President of the European Investment Bank

NICOSIA, CYPRUS, July 8, 2021 /EINPresswire.com/ — Hellas Direct, an innovative, technology-driven insurance company operating in Greece and Cyprus, today announced agreement of a EUR15 million loan from the European Investment Bank (EIB). The venture debt financing – which is the first of its kind to be offered to a Cypriot company by the EIB – is designed to support research and development, accelerate the group’s sales and marketing efforts and expand its customer base, is part of the total EUR 32m raised in Hellas Direct’s latest financing round.

“We are really proud that Hellas Direct is the first Cypriot company to be backed by a venture debt investment from the EIB. The bank’s support means a lot to us, as we prepare to replicate our business model across borders and to pursue a more aggressive acquisition strategy in the region”, said Alexis Pantazis, Executive Director of Hellas Direct.

“This is a great moment for Hellas Direct. We are very excited to be backed by the EIB, one of the world’s leading financial institutions. Their support and know-how will enable us to increase our market share, optimize our services and pursue our long term strategic goals. Great things are coming!”, commented Emilios Markou, Executive Director of Hellas Direct.

“The European Investment Bank is committed to supporting innovation investment and high-tech business growth. The EIB is pleased to provide EUR 15 million backing to accelerate pioneering digitalization driven expansion by leading regional insurance company Hellas Direct through our largest ever support for financial services in Cyprus. The new investment will expand provision of technology led insurance services across the region and adapt financial services to a post-Covid world,” said Lilyana Pavlova, Vice President of the European Investment Bank .

In backing Hellas Direct, the EIB joins a broad range of global investors which includes Portag3, the IFC (member of the World Bank Group), Endeavor Catalyst, the European Bank for Reconstruction and Development (EBRD) and well-known family offices including those of Jon Moulton and Lord O’Neill.

Hellas Direct is a digital-first, full-stack insurance company, empowered by cutting-edge technology and the use of advanced analytics. It has built its own proprietary underwriting and online distribution platform and has developed a cutting-edge claims management platform. The group’s vision is to use this platform to generate leads and claims management fees. Empowered by the latest round of funding and using technology as a competitive edge, the company plans to expand into five blindspot European markets, starting with Romania, in order to replicate the multi-product, multi-channel approach it has successfully deployed in Greece and Cyprus.

Last year the EIB provided EUR 245 million for new investment in Cyprus and since the 2013 financial crisis the EIB has provided nearly EUR 2 billion for public and private investment in the country.

The European Investment Bank (EIB) is the long-term lending institution of the European Union owned by its Member States. It makes long-term finance available for sound investment in order to contribute towards EU policy goals.