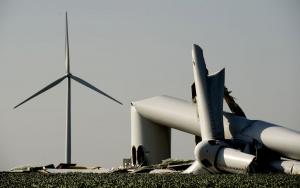 LOS ANGELES, CALIFORNIA, UNITED STATES, July 8, 2021 /EINPresswire.com/ — Many who care about the future of this planet are searching for alternatives to our current fossil fuel energy dependency. Bold new approaches have been proposed by the Biden administration, including accelerating offshore wind energy development at a massive scale to create new jobs using so-called “Green Technology.”

However, there has been an incredible failure of the media and those in positions of power to illustrate the true costs and deep corruption embedded in the use of wind and solar energy, specifically wind turbines. From dependency on China’s rare earth metals to reliance on forced labor, the wind energy industry is unjust and deeply unsustainable.

What you’re about to read is a snippet of Part III, the final piece of a three-part exposé by La Fenêtre Magazine.

Wind energy is not a feasible replacement for fossil fuels because they’re non-recyclable, low-performing, high-cost, intermittent energy sources that require massive land usage and need to be supplemented by nonrenewable sources like fossil fuels. The mining and manufacture of solar panels and windmills and their materials are environmentally destructive and have a dangerous human cost.
We also discussed dependency on China’s rare earth supply chain (rare earths are the energy-intensive raw materials that are key critical components to our technology and communications sector, military defense, medical, biomedical, and of course wind turbines.) In the last two decades, China has come to dominate global rare earth production by investing in mining and processing without enforcing adequate environmental safeguards. “Few other countries are willing to copy China’s low-cost, high-pollution version of rare-earth processing,” reports LA Times. There is a reliance on rare earth minerals for almost all forms of wind energy parts.

There is an extraordinary environmental price being paid by the entire planet for the mining, refinement using pollution-heavy diesel factories, and the shipment of rare earth metals and parts that create wind turbines and solar panels.

In our second installment, we detailed the human cost of the unsustainable wind and solar energy industries, from the inhumane labor conditions required of these supply chains, to the subsidies and debt cycles to China. For a more detailed report, click on Part II of our exposé.

Some key areas to note are the numerous reports of severe human rights issues and abuses relating to rare earth mining sites like the Democratic Republic of Congo. In southeastern China, Toxic waste and radioactive materials are also a byproduct of rare earth processing, poisoning water, and soil and leading to abnormal disease rates for surrounding communities. We also detailed the economic impact of wind turbines and solar panels, including the Government subsidies and incentives which hide the actual cost of wind turbines. In reality, solar and wind facilities suffer from a very high capacity cost per megawatt, low reliability, and deficient capacity factors, which result in low avoided emissions and low avoided energy cost per dollar invested.

In order to pay the subsidies for these renewable energy projects, there is now a total debt of $42 billion and growing without a change in policy. Even since our previous installments, other news outlets have begun to shed light on the various negative impacts of these industries. The National Post recently reported on the ‘solar trash tsunami’ and the economic cost created by unrecyclable solar power waste based on new research out of the University of Calgary. Other outlets are beginning to wise up to the “real cost of wind and solar,” coming to the conclusion that perceived costs and energy outputs just don’t add up.

In this week’s final Part — III Expose’, we offer solutions to the challenges that have been brought forth. With innovation, technology breakthroughs, and ingenuity there are always answers to be sought that can solve the World’s most troubling questions… questions like: Is there a truly clean and sustainable form of energy? Is it accessible and deployable? How long will it take to develop and how much will it cost? These questions are the real need in solving the issues of today and they are knocking at our doorstep… answers like Dam-Free Wave Driven Hydroelectric power, Tidal Pumping Energy Solutions & Ocean and River Current Flow Technologies, along with several forms of offshore Wave Energy Converters for Desalination along with Hydrogen Production and Water Flow Technologies. These safe, simple, environmentally friendly innovations are set to solve today’s issues in tomorrow’s world, paving the way for our children’s children’s future, while setting an example of humanity’s innovative minds, providing productive solutions for our everyday World.

“We are not years away from any longer with usable innovative technologies to solve today’s issues”, says Kenneth W. Welch Jr. inventor, developer, and visionary as he explains one of his disruptive wave energy converters, the SeaDog Wave Energy Carousel. He explains, “this compact powerful wave pumping system offers a small offshore grid-scale footprint while providing a low cost, relatively fast installable offshore grid system to provide Dam-Free Hydroelectric power, equal to most large-scale dams without the dam, nor the destructive environmental shortfalls, inherent in nearly all of today’s hydroelectric dam systems”.

He states, “this manufacturable carousal system will provide not only the ability to pump large flow high-pressure seawater to on or offshore turbine complexes but its design allows for variable flow rates and pressures to create desalinated water production while reconstituting brine discharge to safe levels of release to its surrounding environment”.

In our interview with Georg Engelmann, we asked what have you done over the last year to prepare for the launch of these innovative technologies? We were truly excited with his explanation of not only what they had done, but also with his well-thought-out, fast-paced plans for the year ahead.

You cab read the entire article at https://medium.com/la-fen%C3%AAtre-magazine