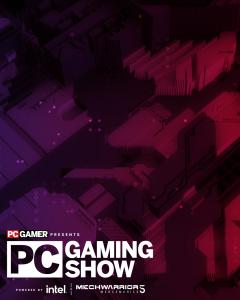 The PC’s library of weird, innovative, and genre-pushing games grows every week. The PC Gaming Show is about shining a bright light on as many of these new projects as we can.”
— PC Gamer Global Editor-in-Chief Evan Lahti

Broadcasting from Los Angeles during the E3 weekend on twitch.tv/pcgamer, youtube.com/pcgamer, and featured prominently within E3’s official programming and the /twitchgaming gathering lineup, the PC Gaming Show will reveal 39 new trailers, game announcements, and interviews to audiences around the world.

“PC gaming retains its position as the world’s most vibrant gaming platform,” says PC Gamer Global Editor-in-Chief Evan Lahti. “The PC’s library of weird, innovative, and genre-pushing games grows every week. The PC Gaming Show is about shining a bright light on as many of these new projects as we can.”

A special showcase of exciting games during E3, this year’s 90-minute show will embrace an imaginative theme: outer space. For the first time, PC Gaming Show hosts will “beam” video content and interviews straight from the cosmos, in a custom spaceship built just for this year’s E3.

“We wanted to bring the visual spectacle of some of our favorite games and fiction to the E3 stage,” says Tim Clark, PC Gamer Brand Director. “We’re big fans of shows like Mystery Science Theater 3000, and this theme will let our hosts channel the fun of E3.” Coincidentally, the PC Gaming Show will feature several games set in the stars.

Building on the show’s independent 2020 presentation that drew 5.9M viewers, this year’s broadcast will combine professionally-produced video packages with live, energetic commentary, broadcasting from the official E3 stage in Los Angeles as well as the aforementioned spaceship.

The 2021 PC Gaming Show is presented by Intel and MechWarrior 5: Mercenaries, partners with a longstanding legacy in PC gaming. This year’s sci-fi theme celebrates the rich history and future of these two partners, a technology leader and franchise that have defined the spirit of PC gaming.

MechWarrior 5: Mercenaries is marking its recent launch on Steam, which arrived with 30 major updates including gameplay and UI improvements, modding, crossplay across all platforms, new audio, and a variety of new bases and garrisons for pilots to explore and destroy. The Steam launch also coincides with the release of the Heroes of the Inner Sphere DLC, which features a new sandbox career mode, 7 new mech chassis, new missions, weapons, equipment, the ability to co-op with a friend who owns the DLC, and more.

As a long-term collaborator with the PC Gaming Show, Intel has powered the celebration of PC games and hardware through a number of integrations, most notably last year’s custom PC build themed to A Total War Saga: Troy. This year, Intel is partnering with the same master modder, Brian “Boddaker” Carter to create a custom rig that E3 viewers will have a chance to win, based on MechWarrior 5: Mercenaries and powered by the 11th Gen Intel(R) Core(™) processor that pushes the limits of performance and gaming.

39 new trailers and game announcements will make up this year’s PC Gaming Show. Read more about what’s being featured in this year’s presentation:

– The reveal of Project Warlock 2
– New content from New Blood Interactive
– Techland will be showing Dying Light 2 Stay Human and giving the first in-depth look at its main character Aiden and his internal motivation, alongside revealing more about the Dying Light 2 Stay Human universe
– The first reveal of a new game from Kasedo Games & Bulwark Studios
– Big news for the Orcs Must Die! franchise
– New gameplay for Hello Neighbor 2, new modes revealed for Rawmen, and a world premiere of a new title from tinyBuild
– A new announcement from Pixelated Milk
– Exclusive content, along with beta and launch information for Naraka Bladepoint
– A reveal of the next game from Shiro Games
– SEGA and Amplitude Studios will have a major announcement and reveal for the highly anticipated strategy game, Humankind
– Exclusive content from All In! Games and a significant announcement about Chernobylite
– An announcement from EVE Online
– A new Chivalry 2 announcement from Torn Banner Studios
– NACON and Big Bad Wolf are showing a brand new trailer for Vampire: The Masquerade – Swansong
– A new unannounced title from Modus Games
– A special offer from GeForce NOW, NVIDIA’s cloud gaming service
– Other exciting unrevealed games
– And a message from Valve regarding Steam

The PC Gaming Show will also include exciting new content from:

As part of both E3 and the /twitchgaming gathering, the show can be streamed on a record number of platforms, including Twitch, YouTube, Facebook, Twitter, Steam, TikTok, VENN, Reddit, Entertainment Weekly, and international partners such as WEBEDIA, Wechat, Bilibili, and AfreecaTV. PC Gamer will be working with both the ESA and Twitch to promote the show through prominent co-streamers.