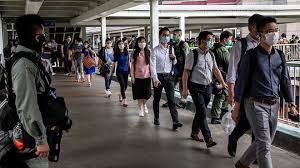 Thousands of Hong Kong police flooded the heart of the city on Wednesday to surround the legislature in an apparent attempt to prevent a vote on two controversial bills that are reviled by tens of thousands of anti-Beijing demonstrators.

The officers arrived at the Legislative Council around 7 a.m. to carry out a Wednesday morning sweep, which was part of an attempt to remove any potential protest blockers before the 7:30 a.m. (10 a.m. GMT) vote.

The city’s outspoken leader, Carrie Lam, arrived at the legislature as soon as the police began arriving.

Pro-democracy protesters continue to protest what they call the “fake eviction” of sympathetic businesses and residents from the Legislative Council at the same time police are undertaking raids of local flats and businesses.

The bills, which will transform the legislature into a rubber stamp and give the government more power, have been vehemently opposed by most citizens, activists and businesspeople.

The Legislative Council was split down the middle at one point last month by lawmakers who demanded their support for the bills from landlords, taxi drivers and builders.

Lam extended the consultation period by 10 days in a bid to find a compromise, and hold the council meeting on the disputed bills.

While Lam was on stage, an unprecedented demonstration took place, with anti-China protesters marching up the steps of the Legislative Council building, leading to a partial evacuation of the building.

Police were seen going to apartments and businesses occupied by protesters, grabbing numerous people, and dragging them away in a bizarre episode. Later, an armoured personnel carrier was seen being taken away, with people being dragged along with it.

“I hope the Hong Kong government will support us in our fight to maintain Hong Kong’s independence, democracy and basic rights,” Iso Kok, a member of the Hong Kong Federation of Students, the protest group that spearheaded the university march.

Hong Kong’s chief secretary, Carrie Lam, emerged a few minutes later, and told the crowd that many of the protesters had been allowed to return to their apartments after police conducted checks.

“It has been a different and confronting day for Hong Kong,” Lam said. “We are carrying out a series of checks to ensure there are no any abuses.”

Lam urged protesters to end the demonstration and to support the Legislative Council session. “For Hong Kong’s future, it is best for us to continue taking a step-by-step approach and engage in talks with your representatives,” she said.