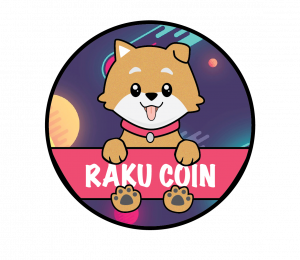 Raku ($RAKUC) is designed so that everyone who uses it is an equal owner and contributor to the network.

NEW YORK, NY, UNITED STATES, June 11, 2021 /EINPresswire.com/ — When crypto-cash first came out, it was seen as something of a novelty. Tech people might have talked about hashing and forks, but most people just saw it as little more than a curiosity. This notion has changed today, particularly as coins like Bitcoin reach more than $50,000 per unit.

New cryptocurrencies are arriving on the scene every day, and many of them have some truly remarkable qualities. Notably, meme coins have become big news these days. A meme coin is one solely that relies on viral advertising to get publicity, so a digital currency with a funny picture was likely created as a meme coin.

Dogecoin had a picture of a dog on it and ended up with a substantial market spike after Elon Musk tweeted about it. Another type of currency with an image of a Pomeranian on it is the Raku Coin ($RAKUC). An audited system that operated on the Ethereum blockchain sees how Raku Coin is a futuristic way to pay and how the concept behind the currency is a way to ensure equality.

Investing in Virtual Currency
It’s never been easier to invest in virtual currency today, particularly as they reach all-time highs. Raku is a fully decentralized meme coin that operates on a peer-to-peer network. In other words, you can send money directly to a friend without having to get a bank or other centralized financial institution involved.

With Raku ($RAKUC), everyone who uses it is an equal owner and contributor to the network. The coin was named after a dog who was more than a companion.

Raku is the name of a Pomeranian who brought a lot of life, joy, and laughter into the hearts of everyone she came into contact with. She may have passed away in 2020, but her life inspired the creators of Raku to invent a currency that honored equality for all who used it.

How Does Raku Coin Inspire Equality?
Equality in finances is a distant dream under the traditional system. People today are subject to the notions of banks, and they often don’t realize just how much it costs them. From withdrawal fees to transaction costs and penalties, the red tape makes it difficult to conduct standard business, whether for personal or professional reasons.

The reason why digital currency has made such a splash (beyond its recent surge in price) is that it presents practical solutions to problems that have only been exacerbated over the years. Raku was created to enhance people’s lives by providing them with an easier way to spend, save, buy, and invest.

With this system, there’s no presale launch or development team to eat up the shares. Everyone is treated fairly with Raku. Plus, 2% of all transactions are distributed to holders in real-time, meaning you can earn Raku just by having Raku in your wallet. The team allocates just 1% to promote the coin.

The Future of Raku
When the creators of Raku ($RAKUC) picture their currency being used, they’re not just thinking globally. This is a project on a far more grand scale. Instead of just using it for everyday transactions, the inventors want to see it used on the moon, Mars, and anywhere else that humans might travel. In addition to funding transactions, the team is dedicated to finding shelters and loving havens for all abandoned and homeless dogs.

The team is also preparing several upcoming projects, including decentralized exchanges, NFTs, and auto-farming yield. People will be able to earn NFTs by staking Raku, whether it’s for art, domain names, or music. Raku home will be a mobile app that bundles the entire system, making it possible for people to track anything from token prices to passive income. Exchanges include custom functionality that will allow holders to trade tokens with ease.

Raku employs a team of developers who know that their primary goal is not to hoard shares but to set realistic goals that will allow them to complete each new phase of development.

As Raku grows, it will adapt its system to better serve the people who take part in its technology. Scaling is a significant issue for cryptocurrency these days, as many wonder if it can handle real-world volumes, and Raku Coin is prepared to fight the problem head-on.

A Little Dog with a Big Heart
Raku was made for a little dog with a big heart. Considering the plans of its inventors, there’s no telling just how far this currency can go in the future. Whether people use it to pay back a friend around the corner or buy a scoop of ice cream, the potential of the Raku Coin ($RAKUC) goes far beyond what the eye can see.