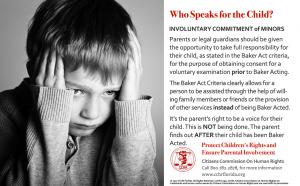 As reported by the Baker Act Reporting Center, an astounding 37,882 involuntary psychiatric examinations were initiated on children across the state.

Involuntary examinations are being initiated on children without parental knowledge. The parent finds out AFTER their child has been Baker Acted.

The Florida chapter of CCHR is a non-profit mental health watchdog dedicated to the protection of children.

The mental health law currently allows for individuals of all ages, including children, to be taken into custody and sent for an involuntary psychiatric examination.

Over 37,000 involuntary examinations, called a Baker Act, were initiated on children in Florida during 2018/2019.

The fundamental right of a parent to help their child is being ignored despite the fact that there is an existing provision for the parent to be given this opportunity.”
— Diane Stein, President CCHR Florida

CLEARWATER, FLORIDA, UNITED STATES, December 16, 2020 /EINPresswire.com/ — According to a report released this week by the Baker Act Reporting Center, there were over 210,000 involuntary psychiatric examinations initiated during 2018/2019 in Florida and more than 37,000 of these initiations were on children. [1]

The mental health law in Florida, commonly known as the Baker Act, allows for individuals of all ages to be sent against their will for involuntary examination at psychiatric wards known as Baker Act Receiving Facilities and held for up to 72 hours. This law was never intended to be used on children yet as reported by WFSU, each day “about 100 kids are involuntarily committed for psychiatric exams under the state’s Baker Act.” [2]

The number of children Baker Acted has been steadily climbing for the past 17 years, and the trauma suffered and the resultant harm to children and their families has become the subject of extensive media coverage on local, national and international news. [3,4,5,6]

This dramatic increase is indicative of abuse says the Citizens Commission on Human Rights (CCHR), a mental health watchdog that investigates and exposes human rights violations in the mental health industry.

The story of a 6-year-old girl sent for an involuntary psychiatric examination in Jacksonville earlier this year, for what was allegedly a temper tantrum, highlights the abusive use of this law. [7]

“Unfortunately, what happened to this little girl is not an isolated incident,” stated Diane Stein, President of CCHR Florida. “Improper Baker Acting of children in Florida has been going on for decades.”

This increased news coverage may be one reason why, for the last 3 years, bills have come before Florida legislators to protect children from Baker Act abuse. These bills, meant to give parents the right to protect their children from the trauma of a Baker Act incident, among other protections, have never made it through to become law.

As the law currently stands, a parent does not have to be notified before their child is taken from school, often in a police vehicle, and at times in handcuffs, for an involuntary psychiatric examination. However, the law does allow for a person in crisis to be helped by “willing family members or friends”. Unfortunately, this common sense approach to reducing the number of unnecessary child Baker Acts has repeatedly been ignored and left out of legislative solutions to the problem. [8]

The solution according to CCHR is to bring parents, guardians and caregivers into the process. CCHR believes that parents should be given the opportunity to help their child before the initiation of a Baker Act and that less restrictive alternatives should be ruled out as a first course of action.

However, this is not happening. Instead children are being taken into custody and transported to psychiatric facilities without the parent, guardian or caregiver even knowing the child has been removed from school grounds.

“Giving parents the opportunity to help their child would not prevent emergency care from occurring in those instances where it is needed,” said Stein. “Just as in the case of a child being injured and needing immediate medical care, a child in crisis would receive the same help.”

A barrier to this change appears to be the mistaken belief that the existing law already covers parental notification, but this notification is only after a Baker Act is initiated and the child must be taken into custody and transported to a psychiatric ward. In other words, under current law, notification is too late for the parents to take any effective action to help their child.

Misconceptions surrounding the Baker Act are common place and spurred CCHR to launch an educational campaign to inform families of their rights under the mental health law. Through the use of free workshops, seminars and mailings CCHR has educated hundreds of thousands of families across Florida and vows to continue pressing legislators to amend the law to require parental notification prior to the initiation of a Baker Act on a child. For more information on the Baker Act, your rights as a parent or to report abuse please call 800-782-2878.