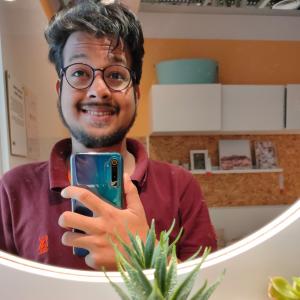 Sadakat Aman Khan, popularly known as Mr. Harmonium, is an Indian Music Personality & an Author based in Kolkata, India.

Khan was born on 11 August 1997 into a Muslim family in Maldá, West Bengal. He received his initial training from his grandfather, Sangeet Acharya Ustad Md. Yunus Khan, who was the senior disciple Ustad Munawar Ali Khan, son of The Legendary Ustad Bade Ghulam Ali Khan.

As a child, he had little interest in music. His grandfather Late Yunus Khan was among the first to note his musical talents, and for some time trained him. However, he received his main training from his father Ustad Sahadat Rana Khan, initially at his house. A strict disciplinarian, Ustad Sahadat Rana Khan would insist on voice training (Swar Sadhana) from four in the morning, and make Sadakat practice one note of the scale for hours on end. A whole day would be spent practising just a single note. It was not until he was 14 that Sadakat began to truly enjoy his musical training.

In December 2020, Sadakat Aman Khan collaborated with artists such as DJ Shiv and Siddharth to fuse Indian Classical Harmonium with Hardcore-Metal. Though it was just an experimental track, it got a huge response from the audiences. The tracks name is “Devil’s Cry” which also got nominated in the prestigious Djooky Music Awards 2021.

Sadakat started performing professionally in various concerts in the year 2010. He has played his international debut concert at Nanhua University, Taiwan in 2020. He has played harmonium solo concerts at various prestigious venues in India and also accompanied his father in Harmonium, in his various concerts. One of such is a Whole Night Classical music Concert organized by DD Bangla.

He also got a chance to accompany stalwarts of Indian music such as Ustad Raza Ali Khan, Ustad Waseem Ahmed Khan and Ustad Arshad Ali Khan to name some.

He has also written two books on harmonium named “Basics of Harmonium” and “10 Thaats in Harmonium” respectively, that are available on all major stores such as Amazon, Amazon Kindle, Google Books and Good Reads.