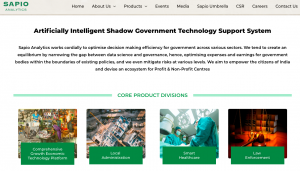 Parthiv Group of companies has partnered with Sapio Analytics, through an investment of 150,000 USD, and association with its financial technology firms.

MUMBAI, MAHARASHTRA, INDIA, July 12, 2021 /EINPresswire.com/ — Mumbai-headquartered government advisory firm Sapio Analytics, with its offices in Palo Alto and London, has received an investment of 150,000 USD from Rakesh Rathi led Parthiv Group. This investment is part of an ongoing bridge round by Sapio Analytics where it is raising funds from selected investors as a run-up to its growth capital fundraise plans.

The valuation of Sapio Analytics for this transaction was at its last FMV of 20 million USD. Founded by serial entrepreneurs Ashwin Srivastava, Hardik Somani, Viral Vora, and Shripal Jain, Sapio Analytics is also led by ex-IRAS officer and former Director of Police in the Ministry of Home Affairs (Government of India) Prashant Nikam, along with other senior officers from governments and former CXOs of leading multinationals.

The company provides artificially intelligent shadow government support system aimed at impacting lives of citizens across developing countries. It has been in the news for developing smart digital census, first-of-its-kind census conducted in the state of Uttar Pradesh by UPICON, besides playing an important role in guiding governments on the fight against COVID-19. The Prime Minister of India had also acknowledged the role of Sapio Analytics in preserving the heritage of India.

“Sapio Analytics provides policy making support to governments using new age technologies, particularly in the urban and rural administration, economic growth, law enforcement and intelligence, and healthcare departments. We have begun our global expansion and this funding by Parthiv Group is a demonstration of trust in our capabilities to strategically expand ourselves across domains and geographies, backed by our A.I. system connecting all our divisions. We shall also partner with LCBidding.com and InsureTech, two companies under the Parthiv Group, and use them to solve the financing needs of entities in smaller towns of India”, says Hardik Somani, Director of Sapio Analytics.

“This investment is an important step in our growth strategy, we hope this association will create a synergy between Sapio Analytics and Parthiv Group’s fintech businesses like Insure Efficient and LC Bidding. Sapio’s global expansion plan backed by their A.I technology makes it the partner of choice for Parthiv Group.” adds Rakesh Rathi whose Parthiv Group has launched first of its kind LC bidding platform and is already a pioneer in insurance technology in the smaller towns of India.

Palantir Technologies, a government technology public company serving the US, is currently trading in public market at a valuation greater than 60 billion USD. Sapio Analytics seems to have been built on similar lines with a focus on developing economies. It recently expanded its international operational base to Palo Alto, with a focus on serving countries in South America and North America.