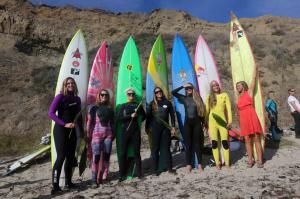 The women of Mavericks and best female big wave surfers in the world in Half Moon Bay, CA credit: Sachi Cunningham

What these women are trying to achieve in and out of the water—to open up big wave competitions for women with equal pay for all—is groundbreaking.”
— Sachi Cunningham, Director of “SheChange”

SAN FRANCISCO, CA, USA, July 7, 2021 /EINPresswire.com/ — “SheChange,” a feature documentary film directed by Sachi Cunningham and produced in partnership with Sound Off Films and the Oceanic Preservation Society, is lining up for a 2022 release following eight years of capturing the best female big wave surfers in the world, in and out of the water. The film follows the real life story of Bianca Valenti, Andrea Moller, Paige Alms and Keala Kennelly as they fight for gender equality in one of the most dangerous sports on earth.

“As soon as I watched Bianca, Paige, KK and Andrea surf Mavericks, it was clear that collectively these women were creating a seismic shift in the sport of big wave surfing,” said Cunningham. “Here are four women who are surfing at the same level or better than the men, and training as professional athletes, yet have no way to financially support themselves through their athletic talent. What these women are trying to achieve in and out of the water—to open up big wave competitions for women with equal pay for all—is groundbreaking.”

The story is centered around Mavericks, a world-renowned big wave location near Half Moon Bay, CA where an unusually shaped underwater reef formation can create waves more than 60 feet tall. There, in an effort to have women included in a surf contest, the surfers join activist and Harbor Commissioner Sabrina Brennan and lawyer Karen Tynan to form the Committee for Equity in Women’s Surfing (CEWS). Together they quickly begin to make waves in the sports world, in and out of the water.

Director Sachi Cunningham is an award-winning filmmaker and Associate Professor of Journalism at San Francisco State University. Her work has screened at festivals worldwide, and in outlets including The New York Times, The Los Angeles Times, PBS FRONTLINE, FRONTLINE/World and the Discovery Channel. Her unique perspective, as a pioneering water photographer, top surf filmmaker, mother and cancer survivor, gives viewers unprecedented access to this empowering story.

“My hope is that ‘SheChange’ will break down the boundaries of gender so humanity can live up to our true potential,” said Louie Psihoyos, “SheChange” Executive Producer, who won an Academy Award for “The Cove” (2009).

“SheChange” is being produced by Adrienne Hall and edited by Stephanie Mechura, both Emmy-nominated. The film is currently shopping for finishing, distribution and partnerships, please contact info@soundoff.co to learn more. Follow “SheChange” on Instagram and at https://www.shechangethefilm.com for more on the future release including dates as they are announced, contacts to get involved and for festival premiere information.