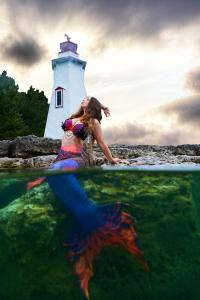 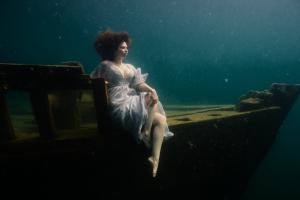 Shipwrecked in Style by Steve Haining 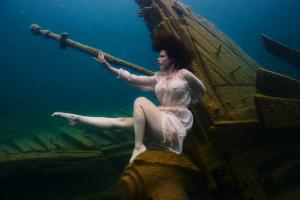 Director & photographer Steve Haining has done it again, setting a new bar for challenging what is
possible in portrait photography. Last week after over 3 months of planning Haining took a model, a
small crew and a couple divers up to the freezing waters of Tobermory Ontario, a place known as the
“shipwreck capital of Canada.” It’s in these harsh conditions that Steve and his team set off on the
adventure of a lifetime.

At the beginning of this 3 day shoot Steve and his dive safety Mareesha dove to some nearby
shipwrecks from shore to spot out a location they could bring the model (Ciara) down to see if the
shoot was even possible in the brisk 51F water. Their first attempt was a great success! They were
only down about 15 ft but Ciara was able to get to the bottom breathing on a backup air supply
provided by Mareesha and would signal whenever she was low on air so the team could get the
regulator back to her before she ran out of breath. Haining and his team got back to shore excited
that this may be a reality and so they began mapping out a plan to take a boat out to deeper wrecks
for the following morning. Dive safety Mareesha also took the evening to rebuild her regulator into
what she called a “Frankenstein” regulator that would make it easier for the model to use between
shots.

The next morning Steve Haining and his team set off from the harbour to the first wreck. Just like the
first day Steve dove down and found the perfect spots for the shots. Once they’re all underwater there
is no way to communicate, the model wouldn’t have a mask on so she would be unable to see either,
so Steve would explain the pictures he was going for to Mareesha and Ciara with as much detail as
possible so that once they were 35ft down everything would run smoothly.

After diving 5 wrecks and the model braving the depths of the cold water with a borrowed air supply
and no visibility for sometimes up to 30 minutes straight the team finally surfaced one last time. “We
got it! That was the challenge of a lifetime and we pulled it off!” shouted Steve as the emotions ran
high with everyone on the crew. The images themselves are eerie and almost indescribable as a
dream project came to life and the impact continues to be shared among art lovers around the world

Shipwrecked in Style by Steve Haining