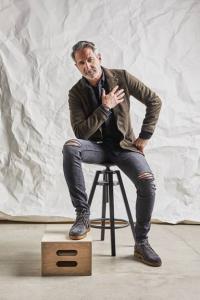 The brand has evolved in so many ways since its inception—expanding across the globe, furthering our sustainability … But we’ve managed to hold onto our core family values. I’m really proud of that.”
— Michael Silver, Silver Jeans Co. CEO

UNITED STATES, June 7, 2021 /EINPresswire.com/ — Silver Jeans Co.™, the Canadian-based brand known for producing quality denim, is celebrating its 30th anniversary this year, along with the 100th anniversary of the parent company, Western Glove Works. To commemorate this milestone, Silver Jeans Co.™ is launching an exclusive ad campaign, engagements across social media, and a highly anticipated, limited edition 30th anniversary denim collection that embodies everything the brand stands for: expertly crafted jeans with unrivaled comfort and an outstanding fit.

“I founded Silver Jeans Co.™ in 1991, but it seems like it was just yesterday,” said CEO Michael Silver. “The brand has evolved in so many ways since its inception—expanding across the globe, furthering our sustainability, becoming a household name. But throughout the years, we’ve managed to hold onto our core family values and stayed true to ourselves. I’m really proud of that.”

The Silver Jeans Co.™ 30th anniversary ad campaign, Thirty Years Young, is set to launch in August 2021, showcasing a celebratory denim collection of the brand’s most beloved fits. These styles feature a message from Founder & CEO, Michael Silver, on the inside of the jean as a token of appreciation to the most loyal fans. The brand will also count down to the launch with a variety of consumer engagements across the @SilverJeansCo social channels, encouraging followers to share memories of their first pairs, highlighting their most iconic campaigns, and holding contests and giveaways.

2021 also marks the 100th anniversary of Silver Jeans Co.’s™ parent company, Western Glove Works, which was founded by the first-generation Silver family in 1921. What started out as a dry goods producer of workwear like dungarees, jackets, and gloves for North America, soon transitioned to focusing on what they did best—denim.

“Western Glove Works represents our family, our passion, and our expertise. As the oldest private denim manufacturer in North America, I couldn’t be happier with the legacy we’ve left on the industry,” said Bob Silver, president of Western Glove Works.

A century later, Western Glove Works has made a name for itself crafting private-label jeans for high-profile names like GAP International and Nordstrom and is now the parent company to both Silver Jeans Co.™ and JAG®.

“I’m excited to see where the next 30 years will take us, both at Silver Jeans Co.™ and Western Glove Works”, Michael Silver said. “We’ve come a long way already, but I see nothing but a bright future ahead.”