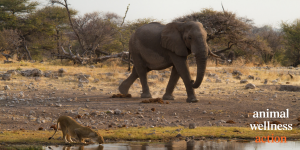 Lioness and elephant meet at watering hole on African plain

WASHINGTON, D.C., UNITED STATES, May 4, 2021 /EINPresswire.com/ — The video released last week by The New Yorker of a hunting gambit by National Rifle Association (NRA) chief Wayne LaPierre reminds us why Botswana and South Africa have a duty to close their doors to foreign trophy hunters who care not a whit for the well-being or conservation of wildlife and who kill for the most transparent and self-aggrandizing purposes.

In 2013, LaPierre and his wife Susan, with a crew in tow from the NRA’s “Wild Skies” show, flew to Botswana for hunting as theater. The staged production was intended to show that the NRA honcho, often seen on news shows in a Zegna suit, is comfortable getting his hands bloody, just like so many other NRA members do on their hunting excursions.

But LaPierre turned in an embarrassing, botched performance in the field. The hunting guide escorting the NRA executive placed him in front of a large male elephant, maybe 30 yards away. LaPierre dropped the five-ton creature – in a show of shooting skill about as difficult as hitting the broad side of a parked bus. Before the hunting party rushed to the side of a downed and suffering animal, LaPierre asked if he’d even hit the elephant. With the elephant making rumbling sounds, the guide told LaPierre to shoot him again, pointing exactly to the place on the head where the slug would kill.

LaPierre couldn’t execute. He took three more shots at point blank range, with the guide showing mounting exasperation. You could imagine a 12-year-old on the receiving end of this real-time blend of instruction and scolding. Yet the elephant kept rumbling after each blast. Eventually, the lead guide told one of the others in the entourage to finish the job. After it was done, all members of the entourage offered fulsome praise to LaPierre, not unlike sycophants huddled around a political leader who just mumbled an incomprehensible speech, but then heard tributes offered for his inspiring, stirring peroration.

Not even masterful editing and gripping narration could have cleaned up this mess. Every aspect of LaPierre’s performance rang a false note for him as a seasoned hunter, and the NRA team decided to mothball the video. Until, that is, somebody within the NRA universe leaked the video.

Botswana Has Reopened Its Border to Trophy Hunting Migrants

The video’s release comes not just at an inopportune moment for LaPierre, but also for Botswanan President Mokgweetsi Masisi. Masisi’s predecessor in 2014 banned the likes of LaPierre and other American trophy hunters from coming to Botswana and absconding with their tusks and manes. That prior president, Ian Khama, decided that the future of wildlife use in Botswana would be grounded on eco-tourism and keeping wildlife intact for serial viewing.

Yet in 2020, Masisi reopened Botswana to trophy hunters, to the likes of men like LaPierre. On April 6th, trophy hunting resumed, after the pandemic had temporarily pushed back the original date for the revival of foreign-based trophy hunting. The country’s wildlife agency is allowing foreign trophy hunters, mainly Americans, to slay 276 elephants – which would make it the top elephant hunting nation in the world by a long shot.

Does President Masisi really want his country to be known as the biggest trophy hunting destination in the world for people who shoot endangered and threatened species, such as lions and elephants?

To the south of Botswana, there is progress ahead, especially for lions. Calling for “the ending of certain inhumane and irresponsible practices that greatly harm the reputation of South Africa and the position of South Africa as a leader in conservation,” South Africa’s top environment official announced yesterday that she is recommending an end to trophy hunting of captive lions and commercial cub petting at the nation’s hundreds of lion farms, which may cluster as many as 10,000 lions.

“We don’t want captive breeding, captive hunting, captive (cub) petting, captive use of lions,” said Environment Minister Barbara Creecy, in calling for the end of commercial exploitation conducted at 350 lion farms. In all there were 60 recommendations from a 25-member panel to examine key wildlife protection policies that she intends to adopt. Also enormously consequential, South Africa will no longer promote the trade in ivory and rhino horn – positions that have put the nation at odds with so many other African nations fighting poaching.

In South Africa, private operators abuse lions during their entire life cycle — keeping them captive and exploiting them for cub-petting, lion-walking, and ultimately, trophy hunting. These “farms” long enabled the mass production of lions in barren, factory farm conditions to supply an insatiable appetite for bones in China for folk medicines, foreign trophy hunters, and unwitting tourists who patronized the farms and perpetuate the cruelty.

“Minister Creecy has called for a ‘New Deal’ for wildlife, and that is precisely what she will deliver if her wishes are put into law,” said Jennifer Skiff, director of international programs for the Center for a Humane Economy. “South Africa is on the cusp of putting an end to the disgraceful slaughter of captive lions for their heads, bones, and tawdry cub petting operations, and it is a joyous prospect.”

There have been determined efforts to stop this commercial exploitation. The documentary “Blood Lions” by Ian Michler and American hunter Rick Swazey was instrumental in bringing this mass exploitation of lions the public’s attention, as was “Unfair Game” by Michael Ashcroft, published in 2019. Lord Ashcroft wrote an opinion piece celebrating Minister’s Creecy’s pledge to end the trade.

“Behind the veneer of the respectable tourist industry, thousands of big cats are beaten, drugged, starved, shot and skinned every year for nothing more than profit. The serial exploitation of these creatures from birth to death and beyond is truly awful. So is the lion trade’s links to international crime syndicates who sell the bones of big cats in Asia. Just imagine: there are about 12,000 captive-bred lions in South Africa at any one time, against a wild lion population of only 3,000. Such abhorrent statistics have left the authorities with few options other than to act.”

Sunday’s announcement from Minister Creecy on Sunday is one of the most important international announcements on animal welfare in years. We can be sure, though, that the commercial lion farming industry and others who trade and traffic in wildlife parts will fight these recommendations in the political realm with fury.

Like LaPierre, the canned hunting operators have tried to conceal their cruelty and have relied on political bullying to maintain the status quo. But change is coming, as spectacles of cruelty like canned lion hunts appear entirely out of touch with 21st century values. Plaudits to the members of the South Africa’s High-End Panel and to the Environment Minister for seeking to turn the page on an ugly era of commercial exploitation of wildlife.

Like South Africa’s leaders, President Masisi of Botswana can also find a pathway to again align his nation with the most the world’s forward-thinking values when it comes to wildlife protection. No good will come to Botswana for hosting the next visit by an NRA chief and the group’s rank-and-file.