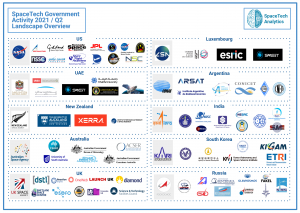 The report provides information about major industry trends and sector insights on 50+ government space agencies and 100+ other government-related entities. It also constitutes a broad picture of the international space industry from a state’s perspective.

The top-50 countries with the largest space budgets are analyzed within a comparison matrix, reflecting the goals and capabilities of each nation. The report distinguishes between the key space nations and new emerging ones. The USA, China, Russia, Germany, France, Japan, India, and a few other countries with long-established programs still dominate the space industry, providing them with significant advantages over the newer players. However, new space countries are rapidly increasing their capabilities. The newer entrants most discussed in the report are: Australia, New Zealand, Argentina, South Korea, Luxembourg, the Isle of Man, and the United Arab Emirates.

In most countries, space agencies operate like coordination centers for multiple government companies, R&D centers, and even private entities. The agencies are responsible for defining and implementing national space programs. Additionally, they establish international cooperation, which has long been an integral part of global space industry development. International cooperation is critical to the development of the space industry for new countries embarking on this path. Thus, an overview of the most prominent cooperation cases between space agencies and private sectors is provided. For example, the International Space Exploration Coordination Group has united 26 countries, who have signed the Global Exploration Roadmap to foster coordination and partnership opportunities.

Some of the analyses takeaways include the following:

– Space is becoming relatively more accessible and affordable, allowing smaller countries to launch satellites with less effort and resources. As a result, many countries in Africa, Latin America, and Asia have begun developing space technologies. For example, Kenya and Bahrain have joined the list of countries operating satellites. New Zealand hosts Rocket Lab, a potential rival to SpaceX. However, in most countries, the space industry is still underdeveloped.
– The number of national space agencies has increased significantly in recent decades.
– New space nations are appearing to challenge the world space order: Australia, New Zealand, Argentina, South Korea, Luxembourg, the Isle of Man, and the United Arab Emirates.
– New models to develop a space industry have emerged, and are available even to small nations.
– Many forward-looking countries are willing to invest heavily in the final frontier (the UAE space agency budget is about $5B, and the Luxembourg space agency has a special fund for investment).
– The development and settlement of the Moon and Mars will require a great amount of new technologies and manufacturing capabilities, implying a need for technology and experience exchange. This will drive more international and government-business cooperation and thus eventually, the industry will grow even faster.
– Those countries that entered the space race in the 20th century have a significant advantage over newcomers (even despite the difference in funding).

This project is one among other projects by SpaceTech Analytics as a part of our Open Access Reports that offer additional insights and interactive features, allowing key market trends to be identified and analyzed with a higher degree of precision. The company will also be releasing an analytically sophisticated second edition of the report and dashboard later in 2021. It will incorporate a review of competitive advanced technologies, a network analysis of international cooperation, analysis of recent countries that have begun the development of their space industries, a detailed analysis of the space industry by region, and political analysis.

SpaceTech Analytics is a strategic analytics agency focused on markets in the Space Exploration, Spaceflight, Space Medicine, and Satellite Tech industries. Its range of activities includes research and analysis on major areas of high potential in the SpaceTech industry, maintaining profiling of companies and government agencies based on their innovation potential and business activity, and providing consulting and analytical services to advance the SpaceTech sector.