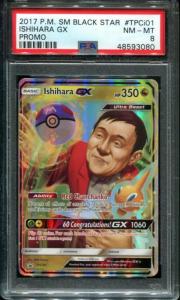 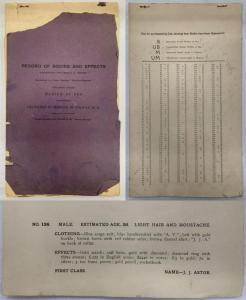 Very rare Record of Bodies and Effects for the passengers and crew of the S.S. Titanic, to include Bodies Buried at Sea and Bodies Delivered at Morgue in Halifax ($10,300). 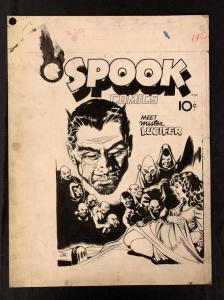 Original cover art for Spook Comics (1946) by John Giunta, 15 inches by 20 inches, from the Bailey Publishing archive and a classic from the Golden Age of Comics ($9,775). 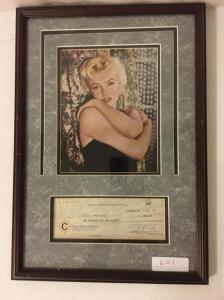 Typed check from 1959 signed by Marilyn Monroe, boasting a strong signature, matted and framed along with a photo of the late actress and with a certificate of authenticity ($3,120).

The card, issued in 2017, is one of only about 60 copies in existence and just the fourth copy to ever reach the market. Overall, the auction grossed $675,000.

LYNBROOK, NY, UNITED STATES, December 11, 2020 /EINPresswire.com/ — An extremely rare Pokémon SM Black Star “Ishihara GX” promotional trading card, graded PSA 8 Near Mint/Mint, one of only about 60 copies in existence and just the fourth copy to ever reach the market, sold for $50,600 in a two-day, online-only auction held November 19th-20th by Weiss Auctions. The card was the top lot in a sale that totaled $675,000.

The Pokémon Black Star card was issued in 2017 and was only given out to Pokémon Company International employees, at TPCi President Tsunekazu Ishihara’s 60th birthday celebration. The cards were personally handed out by Ishihara himself. Today, most of the cards are in the hands of employees who are not permitted to sell them. The card was illustrated by artist Mike Cressy.

Other Day 1 superstar lots were led by an original Peanuts daily comic strip drawn and signed by the late iconic illustrator Charles Schulz (1922-2000). The four-panel strip, dated “5-2-1952”, featured a story line with the Peanuts characters Snoopy and Schroeder. Measuring 27 inches by 5 inches, it was inscribed in ink by Schulz in the first panel. The daily strip sold for $26,500.

Four-panel, hand-colored daily comic strip art for Krazy Kat by George Herriman (1880-1944), dated “11-25-1942” – knocked down for $24,150. The strip featured Krazy Kat, Offisa Pupp, Ignatz Mouse and a brick in the last panel. An inscription at the bottom read, “To Andy from Ole Man Herriman”. Andy was the consignor’s uncle and a friend of Al Capp, the famed illustrator.

Original cover art for Spook Comics (1946) by John Giunta, 15 inches by 20 inches, from the Bailey Publishing archive and a classic from the Golden Age of Comics, commanded $9,775, while a copy of PEP Comics #36, graded CBCS 7.0 and notable because it marked the first appearance of the popular character Archie, brought $8,050. It was a key book in a high grade.

A super rare Record of Bodies and Effects for the passengers and crew of the S.S. Titanic – to include Bodies Buried at Sea and Bodies Delivered at Morgue in Halifax (Nova Scotia) – a list of the 306 bodies that were recovered after a seven-day operation of the cable steamer Mackay-Bennett (116 were buried at sea, 190 were on board) hit $10,300.

A Civil War presentation sword, presented to Col. Edward Bush “Ned” Fowler (1826-1896), an officer in the Union Army best known for his command of the 14th Brooklyn Regiment that fought at the Battle of Gettysburg and the Second Bull Run (the Battle of Manassas), engraved on the scabbard from the General Staff officers, achieved $8,650.

A Paidar cast-iron electric barber pole, approximately 80 inches tall, unrestored but tested and the pole does light up (although it doesn’t spin) changed hands for $3,000. The pole still had its original tag attached, which read, “Paidar Co. Empaco Chicago USA” with a serial number of 283339. Some paint loss areas evidently didn’t deter determined bidders.

• A 1969 Woodstock concert poster, first printing, 24 inches by 36 inches, advertising the seminal event of the decade, with acts like Jimi Hendrix, the Grateful Dead and the Who.
• A typed check from 1959 signed by Marilyn Monroe, boasting a strong signature, matted and framed along with a photo of the late actress and with a certificate of authenticity.
• A first printing copy of Yoko Ono’s book Grapefruit (1971), inscribed and signed by Ono and signed by John Lennon, with his well-known drawings of the couples’ faces.

Weiss Auctions has back-to-back sales coming up this month. On Thursday, December 17th, it will offer toys, trains, Star Wars, die-cast collectibles and more, at 10 am Eastern time, online-only. The auction will be headlined by Part 1 of the Frank Pisani collection of American Flyer S gauge and other trains, trains from the Neil Padron estate and some fabulous Star Wars items.

Looking ahead to 2021, Weiss Auctions will hold an online-only stamps, covers, coins, currency and postcards auction on Wednesday, January 6th, at 10 am Eastern – around 300 lots of quality material. Included will be a world class group of US first day covers, US plate blocks, thousands of new issues, sheets, graded 18th-20th century US coins, bullion coins, US currency and more.

Weiss Auctions is always accepting quality consignments for future auctions. To consign an item, estate or a collection, you may call them at (516) 594-0731; or, you can send an e-mail to Philip Weiss at Phil@WeissAuctions.com. For more information about Weiss Auctions and the firm’s calendar of upcoming auctions, visit www.WeissAuctions.com. Updates are posted often.