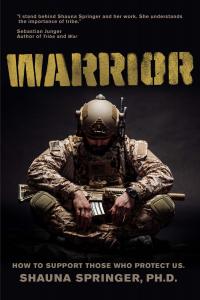 Front cover of WARRIOR: HOW TO SUPPORT THOSE WHO PROTECT US by Shauna Springer, PhD

Dr. Shauna Springer’s wisdom, both penetrating and insightful, has the power to save a life.”
— Bill Edmonds, Special Forces Officer, author GOD IS NOT HERE

BOULDER, CO, UNITED STATES, December 21, 2020 /EINPresswire.com/ — In WARRIOR, Shauna Springer, PhD delivers insights on how to support the people who protect us from threats to our safety—whether they are on a battlefield or in a hospital isolation ward. “Doc Springer”, as she is known to countless military veterans, takes us close to the struggles of our bravest citizens during and after they face traumatic challenges. She draws from the experiences of our warfighters to help us understand true courage and the bonds of love that keep all of us in the fight.

“We continually thank warriors for their service – yet treat them as though they are broken gear,” says Dr. Springer. “We donate millions of dollars to support warriors, yet they tell me that they feel invisible, like ghosts passing unseen through a culture that is utterly alien to them. Through my unique role as a trusted psychologist and “Doc” to our nation’s warfighters, I’ve learned insights that can help us navigate this time of unprecedented trauma. WARRIOR is a book about the isolation, grief, shame, moral injury, pain, shock and sense of disconnection that are the central challenge to bringing our warriors home from war—and confronting the current crisis of our personal and national mental health.”

A graduate of Harvard University, Shauna Springer, PhD is the Chief Psychologist for Stella Center and one of the nation’s leading experts on PTSD and Trauma. What she has learned from more than a decade at the extremesfrom working with our nation’s warriors and their familiescan help all of us navigate this time of unknowns. She co-hosts a weekly podcast in collaboration with Military Times and her work has been featured on NPR, NBC, CBS Radio, Forbes, Washington Post, US News and World Report, Business Insider, and Military Times.

The audio edition is available through digital retailers wherever audiobooks are sold, including outlets such as Audible, Audiobooks.com, iTunes, Google Books. It will also be made available to public libraries across the country.

Armin Lear was founded in 2019 with the purpose of publishing books connecting people with ideas that make our lives richer, more fulfilling, and happier. Its founders have 25 years of publishing experience. The company headquarters is near Boulder, Colorado with a production office in Arlington, Virginia. Armin Lear is a member of the Independent Book Publishers Association and distributes its books worldwide in English through Ingram.

Tantor Media is a leading independent audiobook publisher with nearly two decades of success in producing the highest quality audiobooks for the retail and library markets. Combining must-have authors and award-winning titles with over 400 of the industry’s top narrators, Tantor produces more than 250 new titles every month. Tantor is the recipient of numerous Audie Awards, AudioFile Earphones Awards, and starred audio reviews. Tantor Media is a division of Recorded Books and RBmedia, the largest audiobook producer in the world with operations in the US, UK, and Australia.