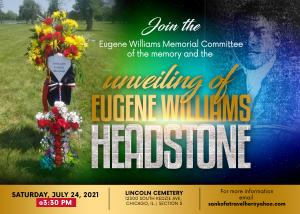 CHICAGO, IL, UNITED STATES, July 14, 2021 /EINPresswire.com/ — A group of concerned civic-minded individuals wanted to right a wrong in regards to a pivotal but terrible time in Chicago history that has been obscured for far too long. The Eugene Williams Memorial Committee, stepped up to make sure the world never forgets the first victim of Chicago’s infamous race massacre, Eugene Williams.

Almost a century after the horrendous massacre that took place in Chicago in 1919, travel historian Tammy Gibson went searching for some answers regarding the death of a young 17-year-old African American, Eugene Williams. The racially motivated assault on his life lit the flames and went down in history as the Chicago Race Massacre in the “Red Summer” of 1919.

It was a warm summer day in July when Eugene Williams went swimming with some friends on a raft in Lake Michigan. Little did he know the tragedy ahead and that he would lose his life when he crossed the unofficial color barrier (at 29th Street) between the city’s “white” and “black” beaches. While a turf battle raged on the shore between the races, a lone white man spotted Williams’ raft on the wrong side of this so-called barrier. The man stoned the raft drowning Williams. The police arrested no one, even though there were eyewitnesses who identified the man who committed the crime. This set off racial confrontations, which ended with the loss of lives in both the white and black communities in the area. The black community also lost over 1,000 homes to fires that torched their properties.

In 2018, Gibson went to locate and inquire about Eugene Williams’ unmarked grave at the historic Lincoln Cemetery. When Williams’ grave was located, Gibson was granted permission to raise money for a proper headstone. The Eugene Williams Memorial Committee was formed in 2019, which brought together Tammy Gibson, David Browning, Scott Priz, and Michael Torney. They used their contacts to raise money, most of which came from Omega Psi Phi Fraternity, Inc. Sigma Omega Foundation.

For more information regarding the memorial, contact Tammy Gibson at sankofatravelher@yahoo.com or phone: 708-606-7380.