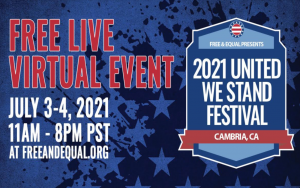 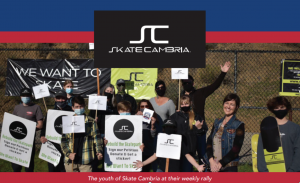 The youth of Skate Cambria at their weekly rally.

The festival featured compelling speeches and performances from dozens of special guests, including several Indigenous speakers.

CAMBRIA, CALIFORNIA, UNITED STATES, July 6, 2021 /EINPresswire.com/ — This past weekend, in partnership with the Brock Pierce Foundation, Open the Debates, and The Independent National Union, The Free and Equal Elections Foundation hosted its seventh annual United We Stand Festival to help fund the rebuilding of Skate Cambria’s local skate park.

Taking place in Cambria, California, the United We Stand Festival featured an abundance of Indigenous talent and speakers. From the Kogi Tribe, Kandymaku appeared as the representative of ancestral tribes from the heart of the spirit world. Kandymaku stated that the Eagle and the Condor have united North America and South America, awakening the spirit of peace. The Eagle and The Condor is an ancient prophecy shared by many Indigenous people.

Doug Red Hail Pineda of the Lakota Tribe, Jon Nash, Tribal Council Children’s Ambassador Diplomat of the Yamassee Nation, and Daniel Ramos, Chief Spiritual Elder of the Choctaw Muskogee Yamassee Nation, Grandfather Uncle of the prophecy of “Warriors of the Rainbow” Tribe of the 4 Directions and 4 Sacred Elements of Life delivered a powerful and inspiring opening prayer. Josiah Helland of the Yaqui/Purepecha Tribe partook in the ceremony with the traditional Native American flute.

Ogimaa (Acha-Kooh-Waay), ‘Jim’, Anishinaabe Knowledgekeeper and Chief of Foothills Ojibway on Turtle Island conveyed a deeply moving message as a virtual speaker at the event.

In addition to those already listed, the festival featured over 50 speakers, activists, artists, and musicians, all united under the cause of bringing communities together to take a more active role in shaping and reforming our country’s politics.

The event hosted three hundred guests in-person and was livestreamed by many via the Free and Equal website.

All proceeds from the event are going toward Skate Cambria to help fund the rebuilding of their local skate park.

The Free & Equal Elections Foundation is a 501(c)3 non-profit organization with a mission to open the electoral process through education and collaborative action.