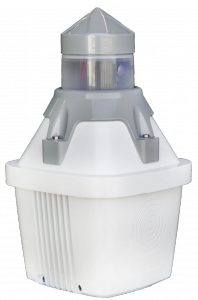 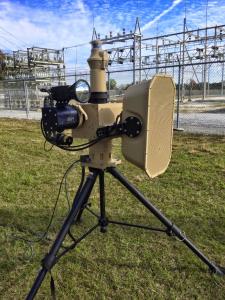 Thermal Imaging Radar (TIR) is a U.S. based manufacturer of award-winning, advanced intrusion detection systems. TIR’s products are manufactured in Utah, USA at a certified ISO 9001 facility. Our cutting-edge technology is a first to market product of its kind, featuring continuous and persistent 360 degree thermal detection technology with sophisticated edge analytics.

TIR Hydra™ combines a Thermal Radar™ with an IR Illuminated Pan-Tilt-Zoom (PTZ) camera; when Thermal Radar™ detects a perimeter threat, it sends an HTTP slew-to-cue command to the PTZ for enhanced intelligence and target confirmation. The use of thermal imagery to detect people and objects is a premise widely accepted in military, industrial and commercial applications, given all objects emit some level of infrared energy.

Most thermal camera perimeter security solutions are typically deployed on the edge of a perimeter and are limited to fixed and narrow fields of view. Built on a premise of doing more with less, Thermal Radar™ protects from the “inside out” with a continuously rotating thermal sensors covering and area up to 200 acres.

Thermal Radar™ snaps and analyzes 480 thermal images per minute from up to 16 camera positions as the thermal sensor is rotated at 30 to 60 RPM. Thermal Radar™ images aggregated, analyzed, and complied into an ONVIF Compliant RTSP video stream which can be easily consumed by a video management platform. The Thermal Radar RTSP stream displays the full 360-degree coverage area, while also showing a detection alarm window as well as an integrated Geo-Spatial map of the coverage area. The TIR Hydra™ combines a PTZ with the Thermal Radar™ and provides customers with both thermal and optical video feeds that are viewed and recorded within a customer specified VMS.

For environments where electrical power and direct network connections are unavailable, TIR’s solar powered Mobile Sentry™ Trailer provides a rugged platform on which the Thermal Radar ™ or TIR Hydra™ can be deployed. Mobile Sentry™ requires only 15 minutes to deploy and utilizes 5G or Wi-Fi to back-haul detection alarms and critical surveillance intelligence.

Thermal Imaging Radar (TIR) Feature #1: Geo Spatial Alerts. Once properly calibrated, Thermal Radar™ can pinpoint any intrusion detection alert on an integrated Geo-Spatial map of the property and sends those GPS coordinates to the user as part of the event notification or directly to a VMS. This makes Thermal Radar™ the ideal platform for tracking unwelcome visitors in denied areas and can be used in conjunction with other camera systems to provide “slew to cue” surveillance.

Thermal Imaging Radar (TIR) Feature #3: Customizable User Interface. Thermal Radar™ users can customize the GUI to meet their exact needs by configuring specific Areas of Interest (AOIs) and Areas of Exclusion to meet the needs of their unique environment. The Thermal Radar™ RTSP stream is ONVIF compliant and integrates easily into your choice of Video Management Systems.

Thermal Imaging Radar (TIR) BANSHEE™. The TIR BANSHEE™ is an integrated active detection and denial solution from Thermal Imaging Radar. The TIR BANSHEE utilizes Thermal Radar™ detections which are then dispatched to a secondary bi-spectral camera with a 100mm thermal sensor as well as a 25-225mm zoom Day/Night camera so that detected targets can be identified and classified for further action.

Thermal Imaging Radar (TIR) BANSHEE™. When the BANSHEE detects a target using the Thermal Radar™ component and the target is confirmed by the bi-spectral secondary thermal and visual camera system, the target can receive any mix of audible or visual deterrent warnings with Banshees’ onboard systems. The platform allows an operator to escalate to the use of non-lethal force with any of the installed devices with a touch of a button. A 300X Acoustic Hailer: Beam width +/- 15°; Maximum output of 143 dB. Spotlight: 12,000,000 Candlepower with adjustable beam width of 1° to 40°. Class III-a Lasers: 530nm (green) and 680nm (red). These are considered ‘eye-safe’.

Thermal Radar™ continuously scans the designated user defined areas of interest while sophisticated edge analytics detect a target that enters the user defined areas. Following a thermal detection, Thermal Radar™ uses an HTTP command to slew the PTZ to the target location. This one-of-a-kind functionality provides customers with 24/7 thermal coverage plus the benefit of forensic targeted surveillance from the visual PTZ.

Hydra™ combines the unparalleled; 360° detection of Thermal Radar™ with a visual IR illuminated PTZ. When Thermal Radar™ detects a threat; the PTZ automatically slews to cue, providing immediate confirmation and targeted surveillance.
Thermal Radar continuously scans the designated user defined area while sophisticated edge analytics detect the object that has entered the user defined detection area. Thermal Radar then commands the PTZ with an HTTP post to slew to the proper heading, tilt and zoom so that the visual IR illuminated PTZ can provide the proper forensic data for confirmation of the detection.

Thermal Imaging Radar (TIR) manufacturers Thermal Radar and the TIR Hydra which are the most advanced wide-area intrusion detection and surveillance solutions in the security sector. TIR also manufacturers the Mobile Sentry Trailer, which provides a mobile, solar powered surveillance platform when power and network infrastructure are not available or too costly to implement. The TIR Mobile Sentry Trailer can be easily deployed for remote sites.