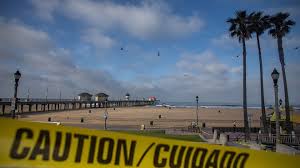 Nomura strategist Tom di Galoma warned that this is what the economic environment may look like this summer as investors fret about cooling global growth and the impact tariffs could have on the stock market.

This picture for the summer is one where the business cycle has peaked, he wrote in a note to clients.

It’s an expected ebb and flow that happens every year. But this summer also marks a “lag” between the business cycle peak and a catalyst such as interest rate hikes, U.S. presidential elections or the trade war. “Each calendar cycle has historically had a few such shocks,” he said.

That can start the period of weakness that follows – or in the absence of a trigger, it makes for a backdrop that will be bearish for stocks.

Since the end of June 2016, the Standard & Poor’s 500 has fallen in 11 of 23 periods, according to Numis Securities, when trade issues were a focus. It adds that eight of those nine periods were preceded by rising tensions between the United States and China.

Di Galoma added that any breakout of the trade war will be “toxic” for stocks.

A bigger concern is that the Fed’s projections for slowing growth could risk an unexpected event such as a U.S. financial crisis or a hard Brexit, he added.

“This is why recent market action has been so poor. This negative feedback loop could have been averted if Chairman Jerome Powell had publicly reinforced the Fed’s belief that the economy could tolerate slower growth,” he wrote.

The current period of decline has been the case since November 2018, he added. The S&P 500 is now down more than 8% from the peak it reached in late January. However, the slowdown is also being counterbalanced by healthy corporate profits and strong corporate cash positions.