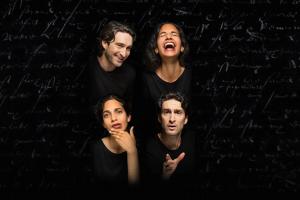 We’re glad to embrace the debates that are taking place in the broader world. And much to our delight, this project brings an original and accessible new perspective to those complicated questions.”
— Bard on the Beach Artistic Director Christopher Gaze,

VANCOUVER, BC, CANADA, July 14, 2021 /EINPresswire.com/ — Bard on the Beach Shakespeare Festival is unveiling a 2021 Season with online programming designed to engage both its existing Festival community and reach out to new audiences across Canada and beyond. The 2021 lineup is highlighted by a bold new venture for Western Canada’s biggest Shakespeare festival – the world premiere of a new play, Done/Undone, commissioned by Bard, produced as a feature film and available on demand on a state-of-the-art digital platform. Tickets for Done/Undone go on sale on July 14 at 1pm PT at bardonthebeach.org

The Festival’s 32nd Season, dubbed Press Play!, features the Shakespeare-themed film and artist Talkbacks, along with Bard Explored – livestreamed conversations with SFU’s Paul Budra and four of the world’s most celebrated Shakespeare scholars; a BC-focused wine-tasting event hosted by Artistic Director Christopher Gaze and Vancouver International Wine Festival Executive Director Harry Hertscheg, and A Shakesperience – a new film for students to be released in September. There is also a series of exclusive digital events programmed for Bard’s Members.

The season’s feature film, Done/Undone, was originally commissioned by Bard as a stage play. When the impact of the pandemic forced the Festival to transition to a digital 2021 season, playwright Kate Besworth and Bard’s artistic team transformed the production to become a feature film, shot in multiple spaces at Burnaby’s Shadbolt Centre for the Arts. Directed by Vancouver theatre artist Arthi Chandra, Done/Undone stars Charlie Gallant (Shakespeare in Love, 2019) and Harveen Sandhu (As You Like It, 2018). The two accomplished actors play a range of characters, including a pair of battling scholars, two cast-members in a Hamlet production, a theatre-going couple who are far apart on Shakespeare’s appeal –and the Bard himself (played by Sandhu).

Done/Undone asks what could be a challenging question for a Shakespeare festival: do the Bard’s plays stand the test of time, and should some not be staged anymore? But, says Bard Artistic Director Christopher Gaze, “We’re glad to embrace the debates that are taking place in the broader world. And much to our delight, this project brings an original and accessible new perspective to those complicated questions. We believe its spirit, wit and bravery will resonate with many people and points of view.” The production addresses questions of race, sexuality, and which voices are heard and valued – questions that are also acknowledged within Bard’s organizational values and its Company Commitments.

The film’s viewing platform, OVERTURE+, offers high-quality playback across all devices, as well as closed captioning in multiple languages to expand the film’s reach to diverse new audiences.

2021 Season Programming at a Glance:

• Done/Undone: Artist Talkbacks – Join members of the artistic team as they have conversations about the film’s themes and take attendees’ questions. Streamed online August 24 and September 21. Details here.

• A Shakesperience – a new film, conceived and scripted by Bard Director of Education Mary Hartman and directed by Dean Paul Gibson. This lively, engaging introduction to Shakespeare will be available for free on-demand viewing beginning in September. More details released in August.

Digital access tickets for Done/Undone are $29 and include all fees & taxes. A Household rate and Watch Party packages are also available. All pricing and access details can be found at bardonthebeach.org or by calling the Bard Box Office at 604-739-0559 (M-F, 12 noon to 4pm PT).

Bard on the Beach gratefully acknowledges the corporate sponsors and donors who support and sustain the Festival and its programs. 2021 support comes from two Season Sponsors – the Peter and Joanne Brown Foundation and BMO Financial Group; Done/Undone Production Sponsor – BlueShore Financial; A Shakesperience Production Sponsor – Lawson Lundell LLP; 2021 TV Sponsor – Global BC; as well as many other valued sponsors and partners. Bard also thanks the City of Vancouver Cultural Services Department, the Vancouver Park Board, the Province of British Columbia, the B.C. Arts Council, Canadian Heritage and the Canada Council for the Arts for their continuing support.

About Bard on the Beach Shakespeare Festival
Bard on the Beach is one of Canada’s largest not-for-profit, professional Shakespeare festivals. Established in 1990 in Vanier Park/Sen̓áḵw, Bard’s mission is to create transformational experiences through exceptional theatre, training, and education opportunities that inspire, resonate, and promote the exchange of ideas. As well as an annual summer Festival, Bard offers year-round education and training programs for youth, adults and theatre professionals both online and in its administrative home at the BMO Theatre Centre in Olympic Village, as well as for schools and community facilities throughout the Lower Mainland of British Columbia.