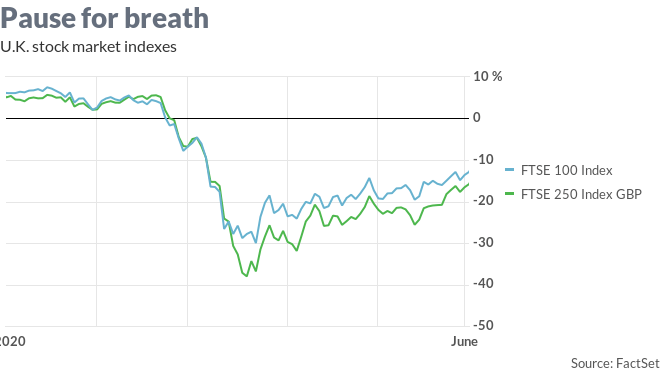 Stock markets around the world are wobbly in a correction, and some markets are feeling the sting. Among the British benchmark, the FTSE 100, May capped its worst month since early 2013. The main index moved down 3% in May to end 4.5% down year-to-date, confirming a correction. The British index is down 28% from its March 2017 high.

May’s 4.5% drop in the FTSE 100 followed a 7.5% and 7.5% one-month declines, respectively. While the FTSE 100 has been the worst performer in May, it remained above the three-year lows reached in March. A 7.6% decline in the S&P 500 in the month confirmed that equity markets were vulnerable.

The FTSE 100 remains the outperformer among European markets, but several more cash-rich U.K. stocks are on investors’ radar in an asset allocation shift from riskier equities to cash, corporate credit and government bonds.

The FTSE 100 has so far responded to Brexit, although the immediate impact has been limited. On 5 May, after May’s Brexit deal was rejected, the market initially traded lower. However, the sell-off was short-lived, only to regain ground during the two weeks that followed.

An important event for the Brexit question came on 28 May, when the European Council (European Union council) released details of its negotiating stance. According to European Commission President Jean-Claude Juncker, the EU27 institutions and the EU member states are all committed to move onto the second phase of Brexit talks at a special summit on 15-16 June, setting the EU and U.K. on a path toward a divorce and new trade deal.

One of the three moves, will require the consent of the United Kingdom government, leaving the UK needing a deal or to be rejected by the EU.