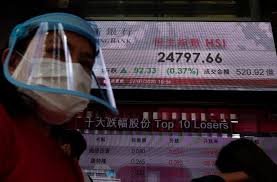 By now you’ve probably heard the U.S. stock market has a record-setting year. The key driver of this surge has been the ongoing tax cuts, regulatory reforms, and corporate profits, which came with a strong backdrop of economic growth. While much of the gains in this year have stemmed from a simple increase in profits, low interest rates, and a stable dollar, there’s plenty of good news in the earnings news for the second half of the year.

On the last two earnings reports, North America’s five largest banks all beat analyst expectations. Consolidated net income at Wells Fargo, JPMorgan Chase, Citigroup, and Bank of America all topped estimates, as well. Because banks typically give net income and EPS guidance for the next quarter, the numbers help guide the sentiment of the entire market. North America’s other major banks continue to give bullish forecasts, for instance Bank of Montreal pointed to strong momentum in its next quarter’s earnings report.

For total profits, the only weak points were the declines in the healthcare and auto industries, which arguably shouldn’t have been a surprise since both are facing headwinds. Wall Street is focused on earnings results for the coming quarters, and it’s hard to find any worries. With that, let’s take a look at each of the three major U.S. indices.

Technology is showing significant strength this week. The Nasdaq outperformed both the S&P 500 and Dow for the first time this year and is now up more than 10% in the past three months.

Over that same time period, earnings for the Nasdaq have increased more than 17%. As of this writing, that represents a particularly strong growth rate among the tech companies that have made headlines recently, including Apple, Google, and Amazon. The biggest contributor to that figure is Apple, which trades for the highest P/E of any S&P 500 company.

U.S. earnings for the Technology sector, in general, have increased 9.5% so far this year. In comparison, the total U.S. earnings growth rate for the S&P 500 is just 2.4%.

Tech is carrying a lot of risk this year and will remain a major contributor to the upward momentum in the U.S. stock market. But with an improving outlook for earnings, Tech is on the comeback trail and has attracted a lot of attention and optimism.