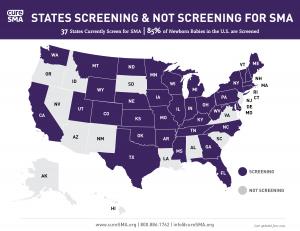 Current Status of Newborn Screening for SMA in the U.S.

Cure SMA Highlights That More Than 8 in 10 American Babies Are Now Screened for SMA in the U.S.

CHICAGO, ILLINOIS, UNITED STATES, June 1, 2021 /EINPresswire.com/ — With the addition of Texas, which started to screen newborns for spinal muscular atrophy (SMA) on June 1, Cure SMA announces the U.S. has surpassed a significant milestone where more than 8 in 10 babies born in the country are now screened for the leading genetic cause of infant death. Texas makes up approximately 10 percent of births in the U.S., with its approximately 377,000 births annually. Now babies diagnosed with SMA in the state can have early access to available disease-modifying, life-saving treatments.

“The addition of Texas to the states screening for SMA is a great milestone in our advocacy efforts to have every newborn in the country screened at birth,” said Kenneth Hobby, President, Cure SMA. “With the availability of effective treatments for SMA, early diagnosis is more important than ever before. Children now have the chance to be treated before the onset of serious and often irreversible symptoms that could drastically impact their life.”

It has been nearly three years since the federal government added SMA to its Recommended Uniform Screening Panel (RUSP) list of conditions states should screen for as part of their state universal newborn screening programs. Screening for SMA is done by testing blood obtained shortly after birth for the SMA gene. As of today, 37 states are screening newborns for SMA, accounting for 84 percent of babies born in the U.S. annually. Texas is the latest to join the ranks of screening states, along with other recent implementers Maine, Montana, and Oklahoma.

In support of the federal recommendation that all states screen for SMA, Cure SMA organized a Newborn Screening Coalition in 2016, with key partners to help implement newborn screening of SMA across the country. Current members include Cure SMA, Novartis Gene Therapies, and Genentech. Cure SMA advocates, including individuals with SMA and families impacted by SMA, also have helped highlight the needs for newborn screening of SMA with elected leaders throughout the U.S. In Texas, for example, Cure SMA advocates regularly shared their SMA experiences at Texas Newborn Screening Advisory Committee meetings and advocated for action, including the development of the Texas Newborn Screening Preservation Account, with the governor, state legislators, and other Texas officials.

About SMA
SMA is a progressive neurodegenerative disease that robs an individual of their ability to walk, eat, and breathe. SMA is the leading genetic cause of death for infants. Symptoms can surface within the first 6 months of life (Type 1, the most severe and common), during the toddler years (Types 2 and 3), or in adulthood (Type 4, the least common form). SMA affects 1 in 11,000 births in the United States each year, and approximately 1 in 50 Americans is a genetic carrier. There are now three highly effective treatments for SMA approved by the U.S. Food and Drug Administration (FDA) that make it possible for babies diagnosed with SMA to achieve developmental milestones and individuals with SMA to live full and productive lives.

About Cure SMA
Cure SMA is dedicated to the treatment and cure of SMA. Since 1984, Cure SMA has grown to be the largest network of individuals, families, clinicians, and research scientists working together to advance SMA research, support the full SMA community, and educate public and professional communities about SMA. The organization has directed and invested in comprehensive research that has shaped the scientific community’s understanding of SMA, led to breakthroughs in treatment and care, and provides individuals and families the support they need today. For more information, visit http://www.curesma.org/.