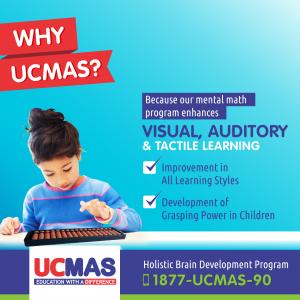 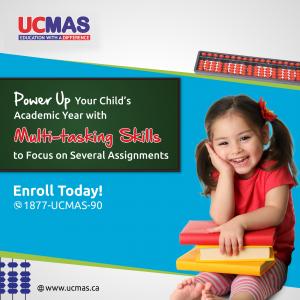 The best Centre in Canada is appointed as the Master Franchise for the UCMAS program in British Columbia, with the intent to grow the region

In the UCMAS program kids start visualizing the abacus in their right brain and do the mental math calculation from their left brain. This exercise leads to a higher speed of calculation with accuracy”
— Founder Prof. Dr. Dino Wong

RICHMOND, BC, CANADA, May 29, 2021 /EINPresswire.com/ — We are immensely proud & happy to inform that Orient Abacus Services Inc (hereafter referred to as UCMAS BC) has been appointed as the Master Franchise for British Columbia. UCMAS BC will now be responsible for all the existing centres in British Columbia as well as developing the territory by helping interested individuals open up new UCMAS centres. Every community in British Columbia can be enriched by helping develop kids to become the next level leaders. To understand more about this opportunity, do not hesitate to contact us.

The Canadian Head Office has seen the consistent focus on quality that students in British Columbia have demonstrated, resulting in following accolades where BC students have performed exceptionally :

– Highest number of awards (19) won by any centre in the world (amongst 6000) in the first ever Global Online Open Math Challenge 2020
– Highest number of awards (147) & Champions (13) won by any centre in the 2021 Canadian National Math Competition
– Brynelle Tesalona ranked 3rd in 2019 in the World Listening competition & Anna Lee won the Champion trophy Visual Math competition in Cambodia
– Beatrice Antoni-Ching became the first ever Champion in the Visual Math competition in Malaysia 2018.
– Petra Dmitrovic ranked 2nd in 2017 in the World Listening Competition in Malaysia
– Two years in a row (2018 – Lexi Ong & 2019 – Brynelle Tesalona) Canadian National Listening Champions

As you can imagine, the above accomplishments have been possible only with the quality education provided by the instructors and with the on-going support from the parents, to ensure that every child benefits. UCMAS BC is also proud that its member has also won the “Best Tutor” award for from 2016-2021 for five years in the Richmond News “Best of Richmond” survey, which is vindication of the support we have from the community in BC, with more than 400 children currently registered in the program.

UCMAS Mental Math is a child development program that first started in Malaysia in 1993. To date we have over 6,000 centres in over 80+ countries worldwide, including Canada, United Kingdom, Spain, India, China, Australia and the Middle East. With over two and half million children trained across the globe, UCMAS Learning Centres serve a real need to boost child development and brainpower for children aged 4 to 13. By offering Mental Math and Abacus training, our UCMAS Mental Math program strengthens children’s memory, concentration and focus. It increases self-confidence and leads to greater proficiency in math skills and overall academic achievement.

In North America, UCMAS started its operations in 2004 in the Canada GTA (Greater Toronto Area) and now has expanded into the provinces of Ontario, Quebec, Alberta and British Columbia. We currently have 100+ franchise locations in North America and have trained over 35,000 students.

We are very excited that we are now licensed to operate in most of the states/provinces in the USA & Canada, with operations commenced in MI, FL, WA, NJ & TX states. Our goal is to continue to expand by providing this valuable child development program by having a local UCMAS Centre in every community across North America.