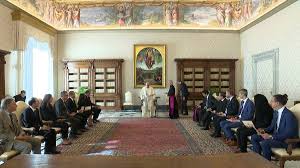 The Vatican said on Tuesday it was selling off its vast holdings in international investments companies to two Italian financial groups in a move it said would generate some €250 million (US$294 million) to help ease its heavy debt burden. The Institute for Religious Works (IOR), as the Roman Catholic Church’s sovereign bank is known, said it had signed an agreement to sell 20-year ownership stakes in two financial institutions, Banca dei Territori.

The Vatican’s bank’s new president, Australian Monsignor Charles Scicluna, told an Italian newspaper last week that the time had come to put an end to the Vatican’s secretive and scandal-ridden banking culture. He reportedly compared the Swiss Guards who protect the Vatican with the Maltese who guard the Vatican’s own bank. The bank’s latest financial statements showed a loss of €255m, down from a loss of €326m the previous year.

The Vatican has transferred some of its charitable assets to its own bank in a bid to get rid of a long-term loan that is hindering its finances. It plans to repay a €242m (£201m; $284m) debt with assets of its Institute for Religious Works (IOR). The move will allow the IOR to have access to the fund’s capital to function more smoothly.