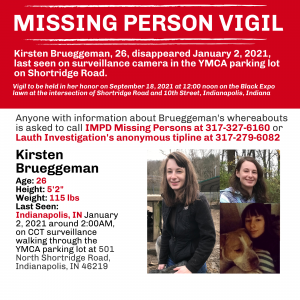 Kirsten was last seen on surveillance camera at 2:00AM walking through the YMCA parking lot in Indianapolis, Indiana.

INDIANAPOLIS , IN , UNITED STATES, September 6, 2021 /EINPresswire.com/ — For more than eight months, the family of Kirsten Brueggeman has been waiting for answers in the disappearance of their 26-year-old daughter. Since her disappearance, Kirsten’s absence has been felt by friends, family, and the community, leading to the organization of a vigil in honor of Kirsten set for September 18th, 2021 slated to take place at the intersection of Shortridge Road and 10th Street.

On the night she went missing, January 2, 2021 Kirsten was enjoying a night out with her friends at a nearby watering hole called The Irish Mutt. She had called her mother to tell her that she would not need a ride home from work because she was going to meet friends. The last time Kirsten was seen, her image was captured on an external CCTV camera around 2 a.m. as she walked through the parking lot of the YMCA at 501 North Shortridge Road. The Indianapolis Metropolitan Police department initially reached out to the community in search of clues regarding the missing woman. As the old adage goes, “Someone knows something.” Police were in search of anyone who might have witnessed Kirsten’s movements at crucial junctures in the final moments before she was last seen. The cameras last recorded her image walking south on Shortridge Road in the direction of East Washington Street. Subsequent searches by both police and independent investigators have turned up nothing, and Kirsten’s family has offered a $10,000 reward in exchange for information leading to her safe return. Lauth Investigations International has started a GoFundMe on behalf of the family to fund an independent investigation into her disappearance. You can donate to that GoFundMe here.

Kirsten Brueggeman is 5’2” tall, weighing about 115 pounds, with brown hair and brown eyes. When last seen, she was wearing a black, waist-length coat, blue jeans, a gray stocking cap, and she was carrying a white backpack. Anyone with information about Kirsten’s whereabouts should call IMPD Missing Persons at 317-327-6160, or contact Lauth Investigation International’s anonymous tip line at 317-279-6082.