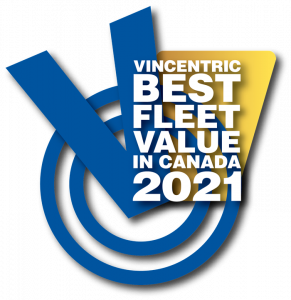 Results of the 2021 Vincentric awards allow winning automotive brands to demonstrate the best-in-class value they provide to the Canadian fleet market.

BINGHAM FARMS, MICHIGAN, UNITED STATES, July 15, 2021 /EINPresswire.com/ — The 10th annual Vincentric Best Fleet Value in Canada™ Awards were announced today, with Toyota and General Motors winning five awards each, more than any other OEM fleet organization. Toyota earned accolades across the Passenger Car, SUV & Crossover, and Van categories, while GM showed strength in the Truck category. The fleet groups from Ford, Stellantis, and Volvo were close behind with four winners each.

Toyota had a broad range of winning vehicles for 2021, with the Corolla S returning for its third consecutive victory, and the Avalon and Corolla Hybrid both achieving their second win in a row. Rounding out Toyota’s winners were the RAV4 Prime for Electric/Plug-In Hybrid SUV/Crossover, and the Sienna with its second win in the Minivan segment. General Motors conquered three out of four segments in the Truck category, thanks to best-in-class performances by the GMC Canyon and Sierra 1500, and the Chevrolet Silverado 3500. GM’s remaining winners were the GMC Savana 3500, and the Chevrolet Malibu LS.

Volvo impressed by coming out on top in more than half of all segments in the Luxury Car category. Leading the charge was the S60, which was honoured with its sixth win for Luxury Mid-Size Sedan. Ford’s top performers were the Transit 150 XL and Transit Connect XL passenger vans, which earned their seventh consecutive and sixth overall wins, respectively. Stellantis earned a spot in the winner’s circle thanks to wins for the Ram 2500, ProMaster 1500, and ProMaster 2500.

Other OEM fleet teams with award winners were Audi, BMW, Hyundai, Kia, Mercedes-Benz, Nissan, and Subaru. Noteworthy winners include the BMW i3 Base with its sixth consecutive victory; the Mercedes-Benz Sprinter 2500 passenger van and 3500 cargo van, which earned their seventh and fifth wins, respectively; the Nissan NV200 S with its sixth win; and the Subaru Outback and Kia Niro, which each received their fifth consecutive win.

“With nine manufacturers winning multiple awards this year, OEMs continue to provide a wide range of best-in-class value vehicles to the Canadian fleet market,” said David Wurster, Vincentric President. “The Vincentric Best Fleet Value in Canada Awards help fleet professionals easily identify which vehicles combine the functionality specific to the needs of their fleet with the best financial value in those segments.”

To determine the 2021 Vincentric Best Fleet Value in Canada™ award winners, Vincentric performed a detailed cost of ownership analysis on over 1,800 vehicle configurations based on typical use in a commercial fleet. Each vehicle was evaluated in all 10 provinces plus the Northwest Territories using 24 different lifecycle cost scenarios and eight different cost factors: depreciation, fees & taxes, financing, fuel, insurance, maintenance, opportunity cost, and repairs. Winners were identified by determining which vehicles had the lowest fleet lifecycle cost in the most scenarios for its segment.

Additional information regarding the 2021 Vincentric Best Fleet Value in Canada™ award winners and the Vincentric award selection methodology is available at www.vincentric.com.

Vincentric provides data, knowledge, and insight to the automotive industry by identifying and applying the many aspects of automotive value. Vincentric data is used by organizations such as the Canadian Automobile Association, Automotive Fleet Magazine, Volkswagen, Mercedes-Benz, and many others as a means of providing automotive insight to their clientele. Vincentric, LLC is a privately held automotive data compilation and analysis firm headquartered in Bingham Farms, Michigan USA.