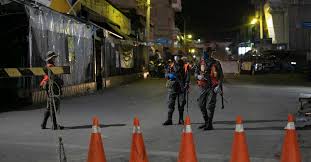 Last month I wrote about Davide Borini, a recent grad who’d been detained by ICE for a period that the Trump administration has been cataloguing in terrifying detail. Now he’s been released, and it’s widely reported that the Obama administration chose not to deport Borini, unlike the current administration, on grounds that his mother was an abused alcoholic who had gotten an involuntary commitment. But in this case, Borini’s mom is not breaking any laws: She’s in possession of a green card, and was in the process of getting hers, including an interview to get her pilot’s license. Under current immigration law, a family member who has entered the U.S. as part of a stay of removal can be deported (a move that would prevent Borini from taking his pilot’s license).

This is a real problem, because only someone with a green card can sponsor for her family a green card, and it’s not always clear who is eligible for one. So, are the children left behind with Borini really endangered, or is it more to do with immigration policy than it is with the horrific behavior of ICE agents?

To be fair, Borini’s case is entirely emblematic of this struggle. While immigration law has become ever more rigid and punitive, bringing a child (or spouse) to the United States is easier and less risky than ever. That’s the result of successful legal changes over the past 25 years that, for example, closed the “birthright citizenship” loophole, which would have allowed foreign mothers to pass their citizenship on to their children regardless of whether they lived here. The legislation that underpins the current “Family-Based” visa system was based on research that showed that close family ties between immigrants and their kin were better than other connections.

That’s why there are so many applicants and success rate for permanent status is fairly high. It’s also why, as of May 31, more than a third of applications are still pending — and that number could be even higher now, given that (the usual procedure is) the agency that manages those holds them all back to assess the validity of the application.

It’s also why, as The New York Times pointed out this week, the majority of green cards granted in the past two years were used by people who didn’t go through the family-based route. After an unusual expansion of the family-visa program known as diversity visas, applications by the eligible “eligibles” surged: 79,394 in 2016 and 76,725 in 2017. It’s also why, among the 867,048 non-immigrant visas approved in the past two years, slightly more than half were for spouses, children, parents and grandparents. (If you’re interested in visiting this great democracy, it should be noted that the destination country information is a bit peculiar.)

That’s not to say that much of the immigration policy debate is coming down to evidence. The headline-grabbing outcome of Borini’s detention shows us only one thing — that ICE’s worst parts are now under the command of the Justice Department, so it’s possible that “the administration” could find the political will to make the kind of sweeping concessions necessary to bring much of the immigration system under control. (That, at least, would be an improvement over the previous administration.)

But even if that happens, we’re still going to be left with a problem — neither of which is directly related to immigration law. According to the latest data, roughly 1.3 million people entered the U.S. as refugees between fiscal 2014 and the end of fiscal 2017, but that’s a fraction of the 45.6 million foreigners who live here illegally. So, yes, family is a lot more important for many immigrants than immigration policy.

At the same time, violent crime has increased during the Obama years, whereas the overall crime rate has stabilized. And as Justice Department statistics recently show, there’s more violence related to mental illness, domestic violence and drug addiction than ever. So while the immigration debate might focus on family reunification — and the news last month underscored that some American families are in desperate need of help — crime is the real problem: More of us are so genetically and culturally mismatched with one another that we can’t handle each other very well.