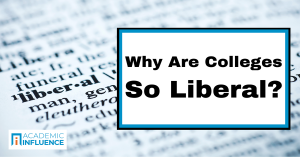 Is the leftward political drift of America’s higher education institutions part of a calculated design? Or is something else at work? AcademicInfluence.com separates fact from fiction in this in-depth article…

If you’re attuned to the news and to chatter on social media, that might be your perception, especially if your sources run to right-of-center politics. But what factors create the impression among conservatives that political thought on college and university campuses isn’t just creeping left but hurtling there? And is that concern valid?

Inflection, the opinion, editorial, and news analysis journal of AcademicInfluence.com, analyzes the claims of progressive liberal bias in the halls of higher education in this extensive investigation:

Why Are Colleges So Liberal?

A few of the questions and challenges addressed in this in-depth article:
● What does “liberal education” mean?
● Do colleges lean liberal?
● Are liberal college professors indoctrinating students?
● Do universities restrict the expression of conservative ideas?
● Does conservatism promote hostility toward universities?
● Will college turn you liberal?

“Stories about students going off to school in button-down Oxfords and coming home for winter break in Che Guevara t-shirts do not constitute fact-finding,” says Dave Tomar, managing editor of Inflection and author of the article. “We wanted to get facts and figures from reputable sources to take this discussion out of the realm of anecdotes and political invective and into a space where thinking people can consider what’s really happening to shift student political alignment—if it’s happening at all.”

To ensure a balanced, comprehensive approach, Tomar and team consulted a wide range of sources, including conservative think tank reporting from the American Enterprise Institute, faculty surveys from Inside Higher Ed, articles from The Chronicle of Higher Education, Ohio State University studies, and Pew Research Center data. In addition, one-on-one feedback from college faculty offered “in the field” insights, much of which may surprise readers.

“We found that the perception that colleges are becoming more liberal can’t be dismissed as mere QAnon conspiracy theory,” says Tomar. “Exaggerations drive some of the conversation. There is no evidence that students are being victimized by some liberal indoctrination plan. But we can’t dismiss the reality that students are genuinely more likely to pick up newfound liberal ideals in college. Read what we uncovered and do the one thing afforded us in an open society: judge for yourself.”

For in-depth insights on other ripped-from-the-headlines issues of interest—and for pre-compiled source material for students and writers looking to cover compelling topics—also see The 25 Most Controversial Topics Today.