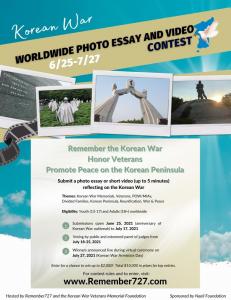 WASHINGTON, DC, USA, June 23, 2021 /EINPresswire.com/ — A Worldwide Photo Essay and Video Contest is launching on www.Remember727.com to commemorate the anniversary of the Korean War (June 25, 1950 – July 27, 1953), honor the sacrifices of the veterans and promote peace on the Peninsula. The Contest will begin on June 25, 2021, and end on July 27, 2021, when the winners will be announced during a virtual ceremony marking the Korean War Armistice Day.

Hosted by Remember727 and the Korean War Veterans Memorial Foundation, the Contest also aims to raise awareness and funds for the Wall of Remembrance that will be added to the Korean War Memorial in Washington, DC. It took almost a decade to pass legislation and raise enough money allowing the construction of the Wall, which will etch the names of the 36,574 Americans killed in the Korean War, and 7,200+ Koreans who also died while serving in the Korean Augmentation to the U.S. Army (KATUSA). The Groundbreaking ceremony was held on May 21, 2021, with veterans, families of the fallen, and South Korean President Moon Jae-In in attendance. Yet, not too many know about this Wall.

“Through this Contest, we hope that many people will learn about the Wall of Remembrance that will perpetually honor those who paid the ultimate sacrifice during the Korean War. The Korean War and its veterans shall no longer be forgotten,” said Col. James Fisher, executive director of the Korean War Veterans Memorial Foundation.

“We are forever indebted to the Korean War veterans all around the world who fought for Korea’s freedom,” said William Moon, treasurer of the Naeil Foundation, which is not only sponsoring the Contest but also has donated $50,000 to the Wall of Remembrance. “Our goal is to remember their sacrifices and remind everyone that Freedom is not Free.”

The Korean War is commonly referred to as the “Forgotten War.” Few know that the Korean War involved 30 nations,* claimed the lives of more than 40,000 soldiers from the United Nations Allied countries.

The 3-mile wide buffer zone between South and North Korea, known as the Korean Demilitarized Zone or the DMZ, is the most heavily armed border in the world. Today, the two Koreas remain divided and are technically still at war. More than 2.5 million Koreans. It separated more than 10 million Korean families who have yet to meet their families in the North.

“We invite you to join a worldwide effort to honor the veterans, many of whom are passing away, and hope for peace on the Korean Peninsula through your photos and videos,” said Hannah Kim, founder of Remember727, who has visited a total of 180 Korean War Memorials in all 30 countries that participated in the Korean War, including all 50 states and US Territories, and met with more than 1,200 veterans around the world. “All they want is for us to remember,” she added.

**The Kingdom of Belgium participated in the Korean War from January 1951 to June 1955. Prime Minister Joseph Pholien sent one infantry battalion. The Belgian United Nations Command (BUNC) fought in key battles, such as the Battle of the Imjin River, and popularized the phrase “Belgians can do too!” In total, Belgium deployed 3,498 soldiers and suffered 440 casualties. According to the statistics provided by the South Korean government, there were 99 killed in action, 336 wounded in action, 4 missing in action, and 1 prisoner of war. The Korean War Memorial in Belgium is located in Brussels at the Korean Square. The names of the fallen are engraved in a memorial in this residential area.

***The Grand Duchy of Luxembourg participated in the Korean War from January 1951 to January 1953. Luxembourg’s size was about a hundredth of that of the Korean Peninsula, yet the Grand Duke Henri sent one infantry platoon. In total, Luxembourg deployed 100 soldiers and suffered 15 casualties. According to the statistics provided by the South Korean government, there were 2 killed in action and 13 wounded in action. The Monument of Remembrance, known locally as Gëlle Fra, is located in Luxembourg City and displays the Golden Lady. It honors those who have volunteered for service and fought during both World Wars and the Korean War.