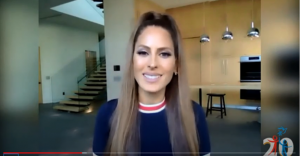 Kerri Kasem, Director of Kasem Cares, talking about human rights and protections for the elderly 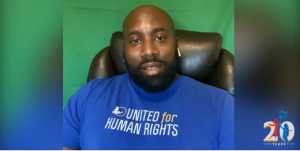 Christopher King, President, United for Human Rights Florida, speaking about the need to make human rights training mandatory in schools and in our communities 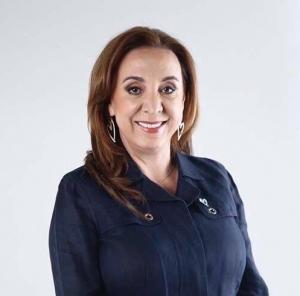 Rosi Orozco, President and founder of the Mexican Commission United Against Human Trafficking, spoke about the need to support victims of trafficking and her appreciation for Youth for Human Rights support in this effort 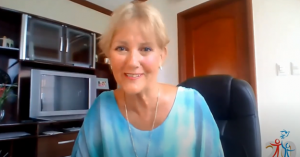 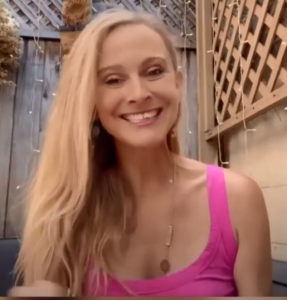 Andrea Powell, co-founder of Karana Rising, thanking Youth for Human Rights for their working with her to support survivors of trafficking

Dozens of human rights advocates, musicians and performers joined to celebrate the 20th anniversary of Youth for Human Rights International

For 20 years we have worked to make human rights a fact … to encourage those in positions of power to disseminate this extremely important message of equality, dignity and respect for one’s fellow man”
— Aaron Carson, Vice President, Youth for Human Rights Washington, DC

WASHINGTON, DC, USA, July 8, 2021 /EINPresswire.com/ — Celebrating the 20th Anniversary of the founding of Youth for Human Rights International (YHRI), an online Freedom concert was held, uplifting the human rights community with various genres of music and performances. The variety of performances ranged from pop to rap and rock-and-roll to swing and Indian dancing.

To support and celebrate the work done over the last twenty years by YHRI, 20 artists performed songs and/or dances focusing on freedom. More than fifteen speakers interspersed congratulatory messages and urged more teaching of human rights.

Speakers focused on the issue of human trafficking and how YHRI has helped in training youth on their rights and how that actually helps protect youth from becoming trafficking victims.

President and founder of the Mexican Commission United Against Human Trafficking, Rosi Orozco, said, “I was a Congresswoman and wrote the law to prosecute traffickers, and we passed it with the unanimous support of Congress. I also created and ran shelters.… I first met Youth for Human Rights … and was so happy to find another group worried about trafficking and willing to help the victims. I am so grateful because Youth for Human Rights has been side by side with our organization, not only to pass the law but also to protect it. Together with all the others in this space we can make a huge difference and save lives.”

Founder and President of Airline Ambassadors International, Nancy Rivard, said, “When I saw the materials… I asked if Airline Ambassadors humanitarian teams could take them around the world. We did deliver them to the Philippines, El Salvador, Colombia, Mexico, and Haiti to very grateful recipients…. We are so pleased to be a part of this work and help take your materials around the world.”

Andrea Powell, co-founder and executive director of Karana Rising, a survivor-led nonprofit that supports survivors of human trafficking and sexual exploitation for life, also participated, saying, “I have known Youth for Human Rights for more than ten years. We believe every young person deserves to be free, safe from violence and able to have access to education and love. We are so grateful for the support of Youth for Human Rights in educating young people across the globe – from Russia to the United States – about human trafficking. They have supported our mission to educate and protect child survivors of human trafficking and advocate for policies that ensure all children are free from this human rights violation. Thank you and happy anniversary to Dr. Shuttleworth and the entire Youth for Human Rights team!”

Radio host Kerri Kasem, daughter of Casey Kasem, longtime host of the “American Top 40 Countdown,” talked about her founding of Kasem Cares and their fight for family and elderly rights. Ms. Kasem and her siblings were forcibly separated from their father when he was terminally ill. This injustice led Ms. Kasem to create a coalition to fight for elderly rights, which has resulted in legislation passing in 12 states to ensure guardians are not able to block family visits.

Christopher King founded the Gentleman’s Club to train at-risk youth in manners and positive images to help them get jobs and respect others. He spoke about the importance of human rights and human rights education, saying, “It is a fight that must never stop. It must be mandatory in our schools and in our communities.” King is the grandson of music legend B.B. King, and is the President of United for Human Rights Florida chapter. United for Human Rights is the sister organization of Youth for Human Rights International.

The host of the event was Aaron Carson, Vice President of Youth for Human Rights Washington, DC. “For 20 years we have worked to make Human Rights a fact in every corner of this planet,” said Carson. “To educate youth and adults on the United Nations Universal Declaration of Human Rights; to encourage those in positions of power to disseminate this extremely important message of equality, dignity and respect for one’s fellow man.”

Youth for Human Rights International was formed in 2001 to promote and teach the UN Universal Declaration of Human Rights (UDHR). Surveys at that time found that very few people were aware of the UDHR, much less what their 30 rights are under the Declaration. YHRI specifically is working to teach youth about human rights and inspire them to become valuable advocates for tolerance and peace.

YHRI believes that children are the future. They need to know their human rights and know that they must take responsibility to protect themselves and their peers. As they become aware and active in this cause, the message travels far and wide, and someday universal human rights will be a fact, not just an idealistic dream.

The United Nations General Assembly proposed that the Universal Declaration of Human Rights “be disseminated, displayed, read and expounded principally in schools and other educational institutions, without distinction based on the political status of countries or territories” (United Nations, 1948).

Over the last twenty years, YHRI has produced short public service videos about each of the 30 human rights under the UDHR. A booklet for youth which simplifies and communicates these rights has also been published and millions of copies have been distributed around the world. It has been translated into 18 languages and offered free to communities to distribute and use. A teachers’ guide for educators to teach the UDHR was also developed and is offered to teachers for free.